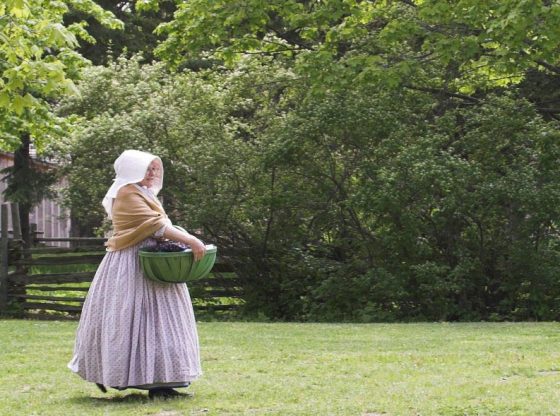 An intrepid, independent soul, Mollie Dorsey was a homesteader in her teens, a gold rusher in her twenties, worked as a seamstress and a cook.  She married the young man of her dreams, though, at times, the dreams they shared seemed like nightmares. Fortunately for us, as we look for female homesteading models, Mollie kept a diary for nearly ten years—1857 to 1866, significant years in her life and our country’s history.

Many of us are just old enough to look back at our lives and see the great changes that have occurred in what seems like a very short time. Some of us, especially those who keep a diary or journal, may toy with the idea of leaving a written legacy for future generations, a reminder of how it was in “them there days.” Looking at a Hollywood movie, thumbing through some vintage photos, can give us some idea. But Mollie’s words pull out the feeling of daily life from home to homestead, on steamship and wagon, 160 years ago.

Mollie’s diary, begun when she was 18, shows that she was a city kid, decently educated (at her Grandfather’s schoolhouse) and full of fanciful notions. Like most diarists, she regards her journal as her “confidante.” The day she begins her chronicle she has just attended her last Sabbath School meeting in Indianapolis. She’s already had and refused one offer of marriage. The eldest of 8 children, Mollie understands that her father has suffered business reverses and that homesteading in Nebraska will be their best course.  But the 600-mile trek from Indianapolis to somewhere near Nebraska City won’t be easy or simple. Consider the logistics of getting ten people, from adults to teens to babies, anywhere, even now.

Their journey starts with a train trip of four weary days, to St. Louis, a noted starting point for river boating from the East to the far-flung, largely uninhabited, Western lands. In Saint Lou, Mollie’s mother rushes out to buy bonnets for everyone—but, Mollie observes, “where will we go to wear them?” The family then boards a famed steamship, Silverheels, which Mollie finds stifling, even scary, but she still manages to describe the 11-day voyage, including being entertained by a “Creole” porter who plays guitar for her.

In Nebraska City, the family gets temporary housing in a log shed, which seems a humiliating start, “but we must make the best.” The cabin is too small for any furniture except a stove, and everyone sleeps on pallets on the floor. Mollie’s father goes off to hunt for land, available from public domain prior to the official Homestead Acts for $1.25 an acre. Mother and children are treated to a “genuine Nebraska wind storm,” making even going to church impossible. By the end of April, spring has come and Mr. Dorsey has purchased a 160-acre homestead in Nemaha, where he will start building a house. One Sunday in May, Father takes the family for a short trip out into the prairie—Mollie finds it enchanting. But by that time, she found a lot of things enchanting, including a certain Byron “By” Sanford, though her initial encounters with him are hardly promising and many other men are vying for her attention. At the end of May, it’s time to move again, to camp out around and gradually furbish the new little house on the prairie.

Getting to Mollie’s new home consists of a wagon ride with heavily laden covered wagons, the family, and a gang of teamsters to handle the horses—no roads, only “gullies and ruts, tangled grass and muddy sloughs.”  The planned one-day trip of some 30 miles is hastily curtailed because the horses gave out and Father “lost his bearings.” The women boil tea with brackish water that, and Mother spends the night retching up her stomachs foul contents. According to Mollie, lying on the prairie under the canopy of stars (it’s on my bucket list!) “sounds romantic enough” but the reality is total exhaustion leaving no space for appreciation. Then, at 1:00 AM, a heavy wind stirs and they must leave at once, in the dark, laboriously hunting inch by inch for a tiny trail.

But, “the sunrise was glorious!”, there’s fresh water from the Nemaha River for tea, and the family soon reaches their new homestead—a 20-foot-square log cabin. I take this to mean it consisted of 400 square-feet, and compare this to the modest millhouse in Mayberry where I live with a hubby and dog—all 1200 square feet of it. We’d be hard-pressed to add an extra ten people, of whatever size, even for a single night. No wonder Mollie’s mother, used to the conveniences of city life, is less than overjoyed. Mollie and her siblings immediately begin fishing and foraging and helping start a garden. The girl finds reserves of happiness, remarking that though “I have no church to go to… I can look around and see God’s beautiful creations.” Pretty advanced thinking for a teenager trapped in a wilderness without bonnets and boyfriends.

Yet, despite the primitive conditions (bathing in the river, co-existing in a single room, fear, if intermittent, of forays by local Indians) and the distance from town, men come courting. Then one day, Bryon comes to visit, spending enough time there to re-ignite Mollie’s former feelings about him. He is a he-man who does real work, smithing and carpentering, in comparison to what she called “fops.”

Then winter sets in, making life, calling for confinement and boredom. Some excitement is stirred up by the family cow that has a tendency to wander. Curiously, Mollie starts having what seems to be prescient dreams, what someone calls her ”prognostical spasms” and she begins to speculate that she might become a “mejium” someday. Mother is blue, concerned that the children had no schooling. There is sickness, and  “disagreeable weather” with almost constant winds.

By May of the next year, Mollie works for a while as a housemaid in Nebraska City. Back to the homestead, now referred to as “Hazel Dell,” by August, she and her siblings pick and put up fruit and she starts writing poetry and telling her diary her the fear that she was becoming “an idle dreamer.” I reckon she was a dreamer by every possible definition, and an artist, who by her own report could make a decent living as a skilled dressmaker.  She also taught school, all by way of helping with family income and establishing her own sense of independence.

Other men came and went, but by and by, By Sanford wins Mollie’s heart, holding her hand and once kissing her on the cheek though they both knew it was forbidden, and finally proposing—by letter.  The engagement lasts three years, putting Mollie in an awkward position socially—too old to be unmarried, and perhaps considered to have been abandoned. But eventually the knot is tied—in the Dorsey kitchen—and the couple moves to Denver, hardly a city at the time. The trek includes more perilous weather and the task of getting wagons through deep sand pits. Mollie sees large bands of Indians, not hostile in this case but seeing as she describes them rather poor and desperate—and has her first view of the sparkling Rockies. Subsisting in a tiny rented room, the couple does not stay long in the lawless Denver outpost. People are regularly shot and killed in Denver’s saloons; currency is all gold dust so everything is overpriced; and once, after casually telling a man that her husband was away, Mollie has to chase the stranger, whose intentions were hardly honorable, out onto the street with a broomstick.

The couple then goes on their own hunt for gold, to a mining camp in Gold Hill near Boulder. By works as a smith for a mining company while Mollie is forced to cook for the workers. They live in a cabin with no floor and no furnishings, not even a mattress. Mollie records that “This is not what my fancy painted it.” One sunny day, Mollie takes time out for herself, reminiscing in her diary and trying, she says, to find time to “think and read…so I shall at least not retrograde.” She was then twenty-two and felt like a burnt-out failure, “thrown out on the cold charity of the world.”

…But from her diary, we know that she was not, and never could be, a failure. She and By remained married, scraped along with their combined skills and determination through the Civil War, and later made their way back to Denver, which was gradually becoming a more sedate, livable place. While working a ranch on the outskirts, Mollie recorded in one of her last sporadic journal entries in 1865 that President Lincoln, “one of the noblest and best of our presidents,” had been martyred.  On July 4th of that year, Mollie wrote that By had gotten work in the US Mint for $4 a day, which she regarded as “a kind Providence.” Her last entry, on January 15, 1866, recounts that Indian raids were cutting off supplies carried by rail, resulting in hard times for the cityfolk.

Mollie and By lived on in Denver, had two children and died within a few months of one another, in their eighties. By some means we can never imagine, at around age 50, Mollie undertook to revamp her journal, “as the original by going through a flood while camping in the mountains is almost obliterated and can only be deciphered by myself.” She willed the book to her oldest grandson, and it has been a highly regarded historical document ever since.

Scholars have called Mollie’s marriage “companionate,” implying that, appropriate to the era, men and women did not marry impulsively, for mere love and heated emotion. The Sanford’s protracted engagement was in part due to their wish to have everything right and ready before they took that big step.  It could be said that such marriages lasted longer than modern ones (certainly, statistically, that is true!). But the secret messages Mollie shared with her closest “confidante” indicate some pretty blush-worthy moments with By, perhaps pointing to more love than scholars like to acknowledge.

At least, that’s what I like to think as I consider the incredible, almost punitive hardships the couple survived by sticking together at a time of life when we moderns expect to graze about and put off tough decisions. They didn’t give up on finding America’s hidden treasure, and in their own way, they typify that golden promise.

Thank you, Mollie Dorsey Sanford, for leaving this legacy. It has made me consider the idea of a similar book for my grandchildren. Not that I would be admired for it—but that our times and our aspirations to live simply in a complicated time might be remembered.

Right On, Sister! The Feminization of Farming in North America

Bamewawagezhikaquay: The most famous person you never heard of.
Covered Wagons Heading West: Life on the Oregon Trail