Letters of a Woman Homesteader 26: Success 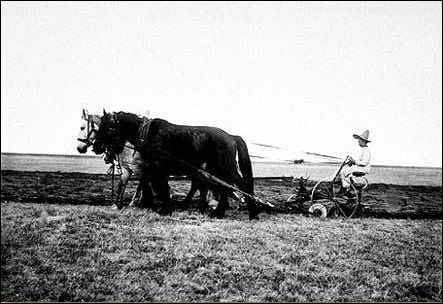 This is Sunday and I suppose I ought not to be writing, but I must write to you and I may not have another chance soon. Both your letters have reached me, and now that our questions are settled we can proceed to proceed.

Now, this is the letter I have been wanting to write you for a long time, but could not because until now I had not actually proven all I wanted to prove. Perhaps it will not interest you, but if you see a woman who wants to homestead and is a little afraid she will starve, you can tell her what I am telling you.

I never did like to theorize, and so this year I set out to prove that a woman could ranch if she wanted to. We like to grow potatoes on new ground, that is, newly cleared land on which no crop has been grown. Few weeds grow on new land, so it makes less work. So I selected my potato-patch, and the man ploughed it, although I could have done that if Clyde would have let me. I cut the potatoes, Jerrine helped, and we dropped them in the rows. The man covered them, and that ends the man’s part. By that time the garden ground was ready, so I planted the garden. I had almost an acre in vegetables. I irrigated and I cultivated it myself.

We had all the vegetables we could possibly use, and now Jerrine and I have put in our cellar full, and this is what we have: one large bin of potatoes (more than two tons), half a ton of carrots, a large bin of beets, one of turnips, one of onions, one of parsnips, and on the other side of the cellar we have more than one hundred heads of cabbage. I have experimented and found a kind of squash that can be raised here, and that the ripe ones keep well and make good pies; also that the young tender ones make splendid pickles, quite equal to cucumbers. I was glad to stumble on to that, because pickles are hard to manufacture when you have nothing to work with. Now I have plenty. They told me when I came that I could not even raise common beans, but I tried and succeeded. And also I raised lots of green tomatoes, and, as we like them preserved, I made them all up that way. Experimenting along another line, I found that I could make catchup, as delicious as that of tomatoes, of gooseberries. I made it exactly the same as I do the tomatoes and I am delighted. Gooseberries were very fine and very plentiful this year, so I put up a great many. I milked ten cows twice a day all summer; have sold enough butter to pay for a year’s supply of flour and gasoline. We use a gasoline lamp. I have raised enough chickens to completely renew my flock, and all we wanted to eat, and have some fryers to go into the winter with. I have enough turkeys for all of our birthdays and holidays.

I raised a great many flowers and I worked several days in the field. In all I have told about I have had no help but Jerrine. Clyde’s mother spends each summer with us, and she helped me with the cooking and the babies. Many of my neighbors did better than I did, although I know many town people would doubt my doing so much, but I did it. I have tried every kind of work this ranch affords, and I can do any of it. Of course I am extra strong, but those who try know that strength and knowledge come with doing. I just love to experiment, to work, and to prove out things, so that ranch life and “roughing it” just suit me.

Dendrology Demystified: A Tree Tutorial, Part 2
Letters of a Woman Homesteader 25: Among the Mormons