Letters of a Woman Homesteader 23: How It Happened

Home /History/Letters of a Woman Homesteader 23: How It Happened 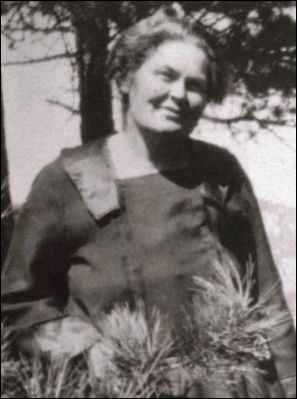 Your letter of the 8th to hand, and in order to catch you before you leave I’ll answer at once and not wait for time. I always think I shall do better with more time, but with three “bairns,” garden, chickens, cows, and housework I don’t seem to find much time for anything. Now for the first question. My maiden name was Pruitt, so when I am putting on airs I sign Elinore Pruitt Stewart. I don’t think I have ever written anything that Clyde would object to, so he can still stay on the pedestal Scotch custom puts him upon and remain “the Stewart.” Indeed, I don’t think you are too inquisitive, and I am glad to tell you how I happened to meet the “gude mon.”

It all happened because I had a stitch in my side. When I was housekeeper at the Nursery, I also had to attend to the furnace, and, strange but true, the furnace was built across the large basement from where the coal was thrown in, so I had to tote the coal over, and my modus operandi was to fill a tub with coal and then drag it across to the hungry furnace. Well, one day I felt the catch and got no better fast. After Dr. F—— punched and prodded, she said, “Why, you have the grippe.” Rev. Father Corrigan had been preparing me to take the Civil-Service examination, and that afternoon a lesson was due, so I went over to let him see how little I knew. I was in pain and was so blue that I could hardly speak without weeping, so I told the Reverend Father how tired I was of the rattle and bang, of the glare and the soot, the smells and the hurry. I told him what I longed for was the sweet, free open, and that I would like to homestead. That was Saturday evening. He advised me to go straight uptown and put an “ad” in the paper, so as to get it into the Sunday paper. I did so, and because I wanted as much rest and quiet as possible I took Jerrine and went uptown and got a nice quiet room.

On the following Wednesday I received a letter from Clyde, who was in Boulder visiting his mother. He was leaving for Wyoming the following Saturday and wanted an interview, if his proposition suited me. I was so glad of his offer, but at the same time I couldn’t know what kind of person he was; so, to lessen any risk, I asked him to come to the Sunshine Mission, where Miss Ryan was going to help me “size him up.” He didn’t know that part of it, of course, but he stood inspection admirably. I was under the impression he had a son, but he hadn’t, and he and his mother were the very last of their race. I am as proud and happy to-day as I was the day I became his wife. I wish you knew him, but I suspect I had better not brag too much, lest you think me not quite sincere. He expected to visit you while he was in Boulder. He went to the Stock Show, but was with a party, so he planned to go again. But before he could, the man he left here, and whom I dismissed for drunkenness, went to Boulder and told him I was alone, so the foolish thing hurried home to keep me from too hard work. So that is why he was disappointed.

Junior can talk quite well, and even Calvin jabbers. The children are all well, and Jerrine writes a little every day to you. I have been preparing a set of indoor outings for invalids. Your telling me your invalid friends enjoyed the letters suggested the idea. I thought to write of little outings I take might amuse them, but wanted to write just as I took the little trips, while the impressions were fresh; that is why I have not sent them before now. Is it too late? Shall I send them to you? Now this is really not a letter; it is just a reply. I must say good-night; it is twelve o’clock, and I am so sleepy.

I do hope you will have a very happy summer, and that you will share your happiness with me in occasional letters.
With much love,
Elinore Stewart.

In writing I forgot to say that the Reverend Father thought it a good plan to get a position as housekeeper for some rancher who would advise me about land and water rights. By keeping house, he pointed out, I could have a home and a living and at the same time see what kind of a homestead I could get.