Letters Of A Woman Homesteader 6: A Thanksgiving-Day Wedding 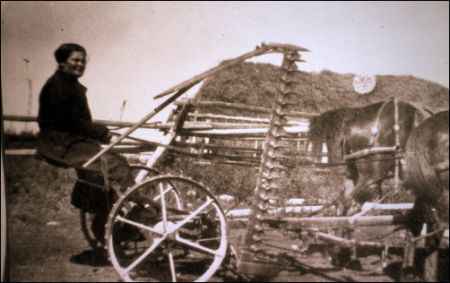 … I think every one enjoyed our Thanksgiving programme except poor Gale. She was grieved, I verily believe, because Mr. Patterson is not Mormon and could not take Sedalia and herself also. I suppose it seemed odd to her to be unable to give way to Sedalia as she had always done.

I had cooked and cooked. Gale and Zebulon Pike both helped all they could. The wedding was to be at twelve o’clock, so at ten I hustled Gale into my room to dress. I had to lock the door to keep her in, and I divided my time between the last touches to my dinner and the finishing touches to Gale’s toilet and receiving the people. The Lane party had not come yet, and I was scared to death lest Sedalia had had a tantrum and that Mr. Stewart would not get back in time. At last I left the people to take care of themselves, for I had too much on my mind to bother with them. Just after eleven Mr. Stewart, Mis’ Lane, Sedalia, and Pa Lane “arriv” and came at once into the kitchen to warm. In a little while poor, frightened Gale came creeping in, looking guilty. But she looked lovely, too, in spite of her plaid dress. She wore her hair in a coronet braid, which added dignity and height, as well as being simple and becoming. Her mother brought her a wreath for her hair, of lilies of the valley and tiny pink rosebuds. It might seem a little out of place to one who didn’t see it, but the effect was really charming.

Sedalia didn’t know that Mr. Stewart had given Gale her dress, so, just to be nasty, she said, as soon as she saw Gale, “Dear me, when are you going to dress, Gale? You will hardly have time to get out of that horse-blanket you are wearing and get into something decent.” You see, she thought it was one of my dresses fixed over for Gale. Presently Sedalia asked me if I was invited to the “function.” She had some kind of rash on her face and Zebulon Pike noticed the rash and heard the word “function,” so he thought that was the name of some disease and asked Mr. Stewart if the “function” was “catching.” Mr. Stewart had heard Sedalia, but knew “Zebbie” had not heard all that was said and how he got the idea he had, so he answered, “Yes, if ye once get the fever.” So Zebulon Pike privately warned every one against getting the “function” from Sedalia. There are plenty of people here who don’t know exactly what a function is, myself among them. So people edged away from Sedalia, and some asked her if she had seen the doctor and what he thought of her case. Poor girl, I’m afraid she didn’t have a very enjoyable time.

At last the “jestice” of the peace came, and I hope they live happy ever afterward. That night a dance was given to celebrate the event and we began to have dinner immediately after the wedding so as to get through in time to start, for dances are never given in the home here, but in “the hall.” Every settlement has one and the invitations are merely written announcements posted everywhere. We have what Sedalia calls “homogenous” crowds. I wouldn’t attempt to say what she means, but as everybody goes no doubt she is right.

Our dinner was a success, but that is not to be wondered at. Every woman for miles around contributed. Of course we had to borrow dishes, but we couldn’t think of seating every one; so we set one table for twenty-four and had three other long tables, on one of which we placed all the meats, pickles, and sauces, on another the vegetables, soup, and coffee, and on the third the pie, cakes, ice-cream, and other desserts. We had two big, long shelves, one above the other, on which were the dishes. The people helped themselves to dishes and neighbors took turns at serving from the tables, so people got what they wanted and hunted themselves a place to sit while they ate. Two of the cowboys from this ranch waited upon the table at which were the wedding party and some of their friends. Boys from other ranches helped serve and carried coffee, cake, and ice-cream. The tablecloths were tolerably good linen and we had ironed them wet so they looked nice. We had white lace-paper on the shelves and we used drawn-work paper napkins. As I said, we borrowed dishes, or, that is, every woman who called herself our neighbor brought whatever she thought we would need. So after every one had eaten I suggested that they sort out their dishes and wash them, and in that way I was saved all that work. We had everything done and were off to the dance by five o’clock. We went in sleds and sleighs, the snow was so deep, but it was all so jolly. Zebbie, Mr. Stewart, Jerrine, and I went in the bobsled. We jogged along at a comfortable pace lest the “beasties” should suffer, and every now and then a merry party would fly past us scattering snow in our faces and yelling like Comanches. We had a lovely moon then and the snow was so beautiful! We were driving northward, and to the south and back of us were the great somber, pine-clad Uintah Mountains, while ahead and on every side were the bare buttes, looking like old men of the mountains,—so old they had lost all their hair, beard, and teeth.