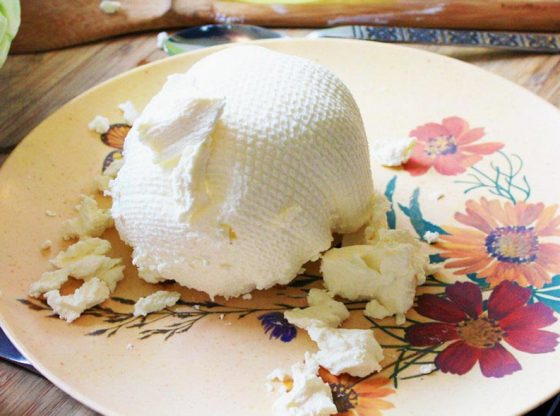 So as I went on and on about how excited I am that I’m making continuous production yogurt (one of the tastier hobbies I’ve ever started), a friend of mine suggested I look into making a batch of labneh, a soft cheese popular in Middle Eastern cuisine. Its closest comparison is to cream cheese—in taste and in texture—but its tartness leads me to believe that it may very well be slightly more versatile, as well as being a perfect alternative to all recipes that would call for cream cheese, anyway.

So I tried my hand at making some, and, woah, is this stuff exciting! What, can a soft cheese be exciting? Well yes, yes it can, for many reasons.

Say you’re of the particular mindset that things can be done without electricity, or maybe you’re interested in making food without electricity and without dependence on store-bought items. Well, then labneh cheese is going to fit into that mindset like a comfortable sweater on a cold day. Or in our current situation, like a comfortable pair of shorts in the sweltering heat. (If you’re interested, it’s now around 90-something degrees in Chicago, and it causes one’s mind to think only of how to achieve comfort.) As long as your yogurt is already prepared, you, thankfully, won’t even have to turn on a stove for this one. It’s best made in a fridge, for a more solid cheese, but it’s just as well made on your counter or over your sink. If you’ve got terribly hot weather, maybe wait for a more moderate temperature day.

Labneh can be made from the yogurt you’re already making from your cow or goat milk.

Labneh can be made in the kitchen sink, on the counter, in the fridge, or over a bucket.

Labneh is so delicious, you may not need to refrigerate it, because you’ll probably eat it within a day or two.

So let’s get into it! This hardly qualifies as a recipe, it’s that simple, but here are some directions.

Take some yogurt—if you’re not already making your own, check out a recipe for homemade yogurt. If you’re still not interested in making your own yogurt, you’re going to want to start with a thick Greek yogurt. This is probably the most important part, because if you try to do this with some vanilla Dannon or something, I can’t tell you what you might end up with. If you have access to yogurt made with goat’s milk, you’re going to be in even better shape, but at the very least, Greek cow’s milk yogurt will do just fine. 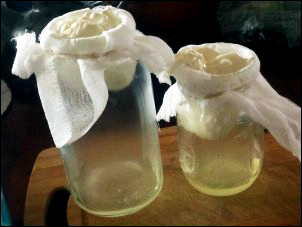 I poured the yogurt with about 1/2 teaspoon of salt mixed in into the center of a linen towel, and then pulled up the sides to secure it at the top, like a little yogurt sack. You could add a little squeeze of lemon juice at this point, but I rarely do. Although a rubber band would be recommended, whatever kind of securing device you can scrounge up will probably do just fine; I held mine together with a hair tie. Something flexible is useful for the hanging and draining stage.

I attach this “yogurt sack” to the faucet of my sink, with a bowl underneath to catch the liquid that drained off, or in warmer weather, I put it into a Mason jar. You could also do this with cheesecloth, but I had my own personal concerns about the solidity of my yogurt from the start, so I went with the thicker linen towel at first. If you’re making labneh with goat milk yogurt, which tends to be runnier than cow milk yogurt, I would definitely recommend using a linen towel rather than cheesecloth. I left it to drain while I went to work, so that’d be about 8 hours or so.

When I got home, I had a pretty well-drained cheese, but I wanted to see how far I could take it, so I transferred it at that point to the cheesecloth, and left it to drain in a jar in the fridge for another few hours. When I opened up the cheesecloth, I had a perfectly gorgeous block of labneh that surprised me with how similar it was to cream cheese and delighted me with its tartness.

I rolled the cheese into little balls, for ease of storage, and have been using them as an addition to nearly every meal (taken bite by bite with scrambled eggs, spread on mushroom and beef meatballs, mixed into quinoa with mushrooms and spinach). I’ve also enjoyed these little labneh balls with a bit of olive oil, and with salt and pepper on toasted wheat bread. It’s delicious spread on wheat crackers. The dogs haven’t had any complaints either, about a bite here and there of the cheese by itself. It could be great as a dip, topped with olive oil and lemon, and you could roll it in or mix in chopped nuts, or fresh herbs like oregano, freshly ground pepper, even roasted red peppers would probably be delightful. It works perfectly as an alternative to cream cheese, texturally and taste-ually. I imagine it making a really interesting pizza topping, and I think it would pair especially nicely with bacon or ham. Sometimes I use it as a dessert, it’s great as the center of a simple graham cracker sandwich, with a little drizzle of honey. 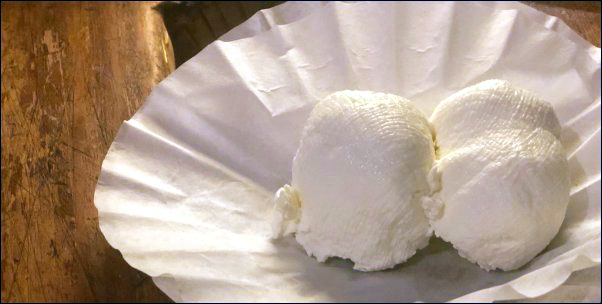 What I find most exciting of course, as I already mentioned, is my ability to make this cheese when I’m living off-grid. It’s a beautiful thing to not feel like it will mean I’m doing without, so much as I’m doing with a tasty alternative. So thanks go out to my friend who recommended this to me. As often as I like to think that I know all the things about food that I need to know, it’s wonderful to be surprised by something so simple that I hadn’t heard of before.

So, go make some labneh! If you do, let me know what you think.

Future Homesteading
Building a Backyard Habitat: Coexist with the Critters