Sylvester Graham and His Wonderful Cracker

When I was a child, way back when, in the good old days, once upon a time… we did not get to eat a lot of sugar. It was not that our parents—our dear mothers and occasionally sympathetic fathers—did not want us to have sugar. In fact, there was an idea that eating sugar made a child sweet (and there could be a scientific explanation for that old mom’s tale). It was simply that life was hard, people still remembered the Great Depression and we were not a culture of excess… yet. What one had was good enough. Treats—and sugar always translated to a treat—were rare, special, and memorable. I still have a straight scar on my right leg just below the knee, about two inches long, garnered on an early sugar search. I had decided to climb up to get at a slab of leftover cake carefully stored away from children’s reach on the top shelf in the kitchen. In order to accomplish this theft (I knew it was very, very bad even as I plotted and executed my plan, coinciding with when my mother was outside hanging up the freshly washed laundry), I had to climb on a chair, then onto a brass towel rack, and then, I was sure I would be at the right level to encounter the cake (yellow, with chocolate icing, and, of course, homemade by Mother, who was an excellent cook). What I did not factor in was the weakness of the towel rack. As soon my sturdy little body got purchase, the rack gave way, and one of the nails holding it in place gouged a deep wound in my leg. Screams, sounds of chair falling, child falling, and Mother running… all for a swipe of chocolate icing… However, there was one treat that was deemed by my mother—and apparently many other mothers—to be acceptable, perhaps, I used to think, because of its innocent name: the graham cracker. A cracker, after all, is not sweet. It was not expensive. It came in a practical red box with no pictures. It was easily doled out, for as every school child knows, omnia graham crackers in four parts divisa est. One cracker was the usual ration. I loved graham crackers, partly just because I was allowed to have them, but also because they had a certain friendly crispness, a melt-in-the-mouth texture with a bit of a tickle—probably the bran. You could make a graham cracker last. In a small hand, it was large and substantive. And it had those neat air holes. But, I grew up and put away childish things. I confess, I got into Pepsi at around age 12, and at 14, I started smoking, so that by the time I went to college, my usual breakfast was a ciggy, a Pepsi and, shudder, a Milky Way. My mother did not know of my vices (I am sure she suspected the smoking). I had gone way past the graham cracker in my search for taste sensations. So, it was a surprise, a pleasant one, to see, a couple years ago, in the local grocery store, a red, rather old-fashioned looking box on the shelf, announcing its contents as the “original” graham cracker. I had to try it, and honestly, I was not disappointed. By that stage of life I had long since quit smoking, and learned to hate all things corn syrup. The desire to remain reasonably slender and fit had militated against chocolate in most of its forms, and my hubby’s diabetes kept nearly all egregiously sweet stuff out of our larder. But…graham crackers. Surely an exception! These “originals” were satisfyingly sweet, made with sugar, a bit on the branny side, and in appearance exactly like the remembered childhood treat, complete with the mysterious little dots. Then, as chance would have it, not so long after reuniting with what seemed a rather harmless indulgence (I was calorie counting at the time and noting that one cracker was about 130 calories and still had the satiety value of the long-ago product), I read a book that would take me farther into the mysterious Secrets of the Graham Cracker: 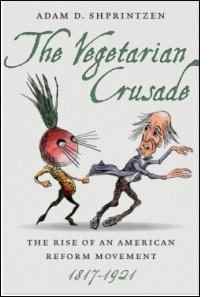 I found from Mr. Shprintzen’s book that Vegetarianism as a discipline arrived in America from England with our earliest settlers, and took hold among fundamentalist groups like the Bible Christian Church and later, the Seventh day Adventists. The American Vegetarian Society, modeled on an English one, was born in 1850 and was soon taken under a broad reformist umbrella, espoused by activists like Bronson Alcott (Louisa May’s dad), who established Fruitlands, his vision of a vego-topia. But it was the zealous, hellfire-preaching Sylvester Graham (1794-1851) who would pioneer the eponymous snack. In the early 1800s, Graham carved out a niche for himself by ranting against the evils of demon rum, in what was then the small, but quickly spreading, temperance movement. 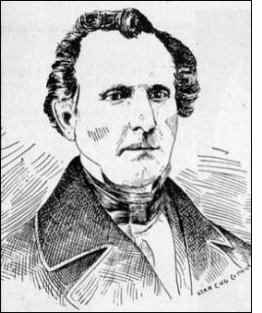 Some Homemade Graham Crackers as Cooked by Me 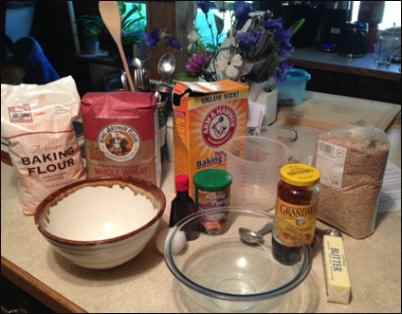 1. In a medium bowl, combine the flour, baking soda, baking powder, and salt. Add the butter and cut it into the flour mixture with a pastry cutter until the mixture resembles coarse meal. 2. In a small bowl, whisk together the molasses, vanilla, and egg. Add to the flour mixture and mix with a wooden spoon (or your hands) until the dough barely comes together. It will be soft and sticky. 3. Turn the dough out onto a lightly floured work surface and pat into a rectangle about 1 inch thick. Wrap in plastic and chill until firm, about 2 hours. 4. To make the topping, in a small bowl combine the sugar and cinnamon and set aside. 5. Sift an even layer of flour onto the work surface and roll the dough into a long rectangle about 1/8 inch thick. The dough will be sticky, so flour as necessary. Trim the edges and cut into individual rectangles (mine were about 3 x 4 inches). Gather the scraps together and use to make additional crackers (you may have to refrigerate for 15 minutes if the dough becomes too soft). Place the crackers on a baking sheet and lightly sprinkle with the topping. 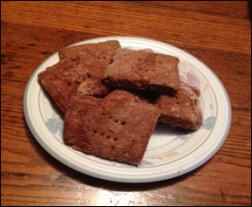 6. Adjust the oven rack to the middle positions and preheat the oven to 350 degrees.  7. Using a toothpick or large fork, make two dotted rows in each cracker. I’m not sure if these serve any purpose but they look adorable! 8. Bake for 20 minutes, until browned and slightly firm to the touch. Let them cool and they will retain a bready texture with hardened edges. Time and practice will perfect these to your preference: if you like the bready texture, make the dough thicker and cook slightly longer. If thin and crisp is your desire, a flatter final roll out and 20 minutes should do the trick. I hope Sylvester will forgive me for snacking.

The Sweet History of Gingerbread

Creamy Potato Soup
Darkness Tomorrow — No Electricity for A Year