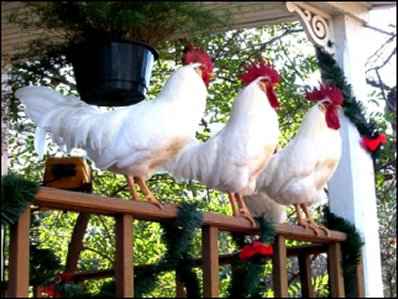 They looked innocent enough, like fuzzy giant skittles bouncing around the tub.

My friend had purchased colored Easter chicks for her daughters and had assumed that I would be thrilled to take them after Easter.  Why not?  We DO live in the country.

Thirteen brightly colored chicklets arrived at our place in a large cage.  They were cute, they were fluffy, they were hungry.  They made endearing little noises when we fed them.  We loved our chickens…

Before long, they had molted out of their Easter feathers and looked like real chickens.  They were turned loose to free-range and be the cherry on our country yard sundae.

The coyotes in the woods also loved our chicks.  In no time we were down to 8.  Our only Rhode Island Red in the bunch wandered into the dog pen and we were down to 7.  One started to terrorize the cats and went to live with a friend.  One chased our little boy and went to live with a neighbor.   Five chickens—4 White Leghorn roosters and (we thought) a big Barred Rock hen.

The Barred Rock foraged into the goat pen and the Great Pyrenees decided she needed a bath.  By the time I got out there she was gasping and dripping with dog drool.  I turned her back into the yard, and she didn’t join up with the other chickens right away, she just stalked up and down, mumbling chicken curses.  From that point on, she couldn’t/wouldn’t roost up in the tree with the others, but chose a low spot right next to the goat pen (go figure) to sleep in.  We rested a piece of sheet metal against the fence to make a chicken-tent.

About that time they entered poultry puberty.  The roosters crowed roughly every 5 minutes all day long and most of the night.  They started making little fighting runs at each other and I worried that they would kill each other.  That would be bad, because we loved our chickens.

I needn’t have worried.  Before too long they stopped quarreling amongst themselves and turned all their energy on a common enemy—me, and by association, my son.

They were a Chicken Gang.  All they needed were little leather jackets, sunglasses, and packs of Camels (filter-less of course) rolled up into their wings.  They’d stand at the edge of the woods, daring the coyotes to come out.

They cruised the neighborhood, lookin’ for trouble, mean and restless.   I now know what the Raptors in the Jurassic Park movies are based on—roosters.  They have the same moves, calls, and hunting tactics.  They would sneak up behind me to attack, barking strategy to each other.  If I turned around, they’d freeze and look off into the distance, casually.

I started carrying a broom.

They recognized my car and would come running at the sound of it.

I tucked the broom under the car seat.

They would come onto the porch and stare at me through the glass door, growling.

I was beginning to dislike our chickens.

At first, my son just carried a big stick when he played outside.  Since the roosters outnumbered him, after a while he only went out to play after they roosted in the evening.  He was becoming pale and a little twitchy.

Invitations to our house became BYOB: Bring Your Own Broom.

It was time for the roosters to go.

We tried to catch them, but they were fast as greased lightning, very wary, and practiced survivors, being the ones who outlived coyote-fest.

I ran an ad in the Thrifty Nickel that read: “Free Roosters. White Leghorns, 7 months old. Free Range. Mean as Snakes. You Catch.”

The first 6 calls I got were not for the chickens, but for the stove we were giving away (read the ad again).  The 2 good ol’ boys who attempted catching the roosters went away empty-handed, the taunting of the roosters ringing in their ears.

Nabbing them while they were sleeping was difficult since they roosted way out on the limb of an oak tree 20 feet in the air.

I hated our chickens.

I began trying to run them down with the car as I drove into the yard.  I could SEE them going under the car, but they always exploded out from behind, missing tail feathers, and screaming poultry death threats.

One of them actually leaped up onto the hood of the car, glared at me through the windshield, and crowed defiantly.

I loathed our chickens.

At long last, the son of a friend came after dark, perched atop the tallest stepladder we had, and plucked them neatly from the oak tree.

The roosters were back in the cage they had first come in.  With the Fearsome Foursome behind bars, our “hen” started crowing.  Lacy was really Larry.  He has been warned that he’s ridiculously easy to catch, living in a tent and all, so he’d better behave or he will suffer the same fate.

Like the idiot I am, now I pitied the chickens.

What to do with them?

The obvious answer, kill them and eat them, is still beyond my ability.  I KNOW they are just chickens, and we eat chicken all the time.  I KNOW given weapons, opposable thumbs, and a nice gas grill, they would have no problem killing and eating us.  I just couldn’t do it.  Still working on that part of farming…

We couldn’t give them away to lay siege to someone else’s yard.

We toyed with the idea of driving far away, finding a nice wild wooded spot, and setting them free.  My husband even started singing “Bock, Bock, Bock, Born Free…”, but we were advised that they would have a bad environmental impact on the wilderness.

Finally, they went into the stewpot at a friend’s father-in-law’s house, an ignoble ending to what could have been a glorious life.

I didn’t mind the constant crowing, the massive amounts of poop EVERYWHERE, the feathers.  If they just hadn’t been aggressive, they could’ve lived long and free for all of their chicken days.

I feel sad, because, after all… we loved our chickens.

Weston A. Price: Introducing the “Real” Way of Eating
Right On, Sister! The Feminization of Farming in North America