***Warning: this article contains some explicit references to childbirth.  If you are the least bit woozy at the thought of this, you should probably re-think parenthood anyway.

I have three wonderful children.

When I was very young and newly married, I became a mother for the first time.  My OBGYN was a very strict, humorless woman, who had delivered thousands of babies including myself and my husband.  In her opinion, giving birth was a medical condition, and you listened to the Doctor with no questions asked.

After attending a few hospital-run “Natural” Childbirth classes, I decided that

a) I was not attending any MORE hospital-run “Natural” Childbirth classes, as they frankly made me want to hurl and

b) Drugs were a good thing.  I told my OBGYN to empty her black case, I wanted at least two of everything, preferably washed down with some stiff spirits.

Due to some minor medical difficulties, however, when my lovely Erika made her debut I did not get my drugs, was bossed around and terrorized by the hospital staff and endured 12 hours of unwanted natural childbirth.  After the fact, I was grateful for the natural childbirth part, since immediately afterward I felt wonderful and was ready to walk out of there with my new daughter.  Because this was back in the “old days” , they insisted that I remain a guest of the hospital for 3 days.  The woman in the next bed had had a c-section and received all the drugs I thought I wanted.  She spent the first 24 hours of motherhood sick as a dog.

Lesson #1: Drugs are not as great as they are cracked up to be.

Five and a half years later found me back in the same hospital for the arrival of David, who appeared after less than six hours of labor.  This time my OBGYN was a wonderful man whose office walls were literally lined with photos of “his” babies and who was of the opinion that birth is natural and wonderful and that his role was basically to be on hand just in case.  Also to catch if the daddy passed out.  He firmly believed that hospitals are the worst place in the world to have babies because they are full of germs.  Unfortunately, Wisconsin was a state that was keeping it’s residents safe by making home births illegal, so the hospital was our only option.  This time I was ready for the de-personalizing that every birth-mom goes through from the hospital staff and with the blessing of my Doctor was much more vocal and adamant about what I would and would not endure at their hands to make THEIR jobs easier.  After Erika, I knew I could have this baby without drugs and didn’t request any.  Insurance attitudes had also changed and they started a timer the second that baby took his first blink and escorted me out the door 24 hours later.

Lesson #2: Hospitals are mostly superfluous to the birth event

Different husband: one with no children, and what a shame is THAT?

My interest in midwives and homebirth that my last OBGYN had sparked became suddenly extremely relevant upon learning at age 39 and 10 months that I was to become a mother again.  Added to the above lessons learned early in life and my gut feeling that giving birth at home was just a “righter” way to go about this, was the financial aspect: a hospital birth at right around $20,000 compared to homebirth of $1,200.  Yes, the comma IS in the right spot and no I DIDN’T forget a few zeroes.

On our first visit, we went over my history.  Given that I had given birth twice naturally with no major complications, she saw no need for alarm.  Because I was over the age of 35 (read “High Risk Birthmother” to the medical community), she gave us the option of going to an OBGYN she worked with for an ultrasound or amniocentesis if we desired, and we declined.  She told us we could deliver either at her birth center or at home if we lived within a 30 minute drive of a medical facility, and we do.

Midwives follow much the same procedure as an OBGYN with regard to scheduled appointments.  They have the same schedule, they test  for the same things using the same lab tests, and they monitor the baby’s growth in the same ways.  The difference is in the presentation.  Their offices resemble (or truly are) their homes.  The exam table is a real bed complete with comforter and pillow.  There’s not a stirrup, 2 year old magazine or paper gown in sight.  There is no waiting room full of other pregnant women.  When you have an appointment, you are the patient.  Period.  The entire pregnancy is treated not as some deviant medical condition, but as a personal wonderment to be nourished and celebrated.  What a concept.

Near the end of pregnancy, we gathered together supplies from a list provided and prepared for our birth.  These items were readily available at the local grocery and drug stores.

We were encouraged to take home and watch a video of an actual home birth, which I slipped into the VCR with much trepidation (the video of an actual hospital birth is what sent me over the edge years before).  I needn’t have worried.  Instead of the brightly lit, fast paced, sterile delivery room full of serious brisk hospital staff who seemed to consider the birthing mother as an inconvenience to be tolerated was several hours of a family at home.  The mother-to-be spent a lot of time in her rocking chair, reading to her other children, and walking with her husband.  She drank some tea.  Eventually she went to bed and proceeded to have her baby.

Here’s why it was so important to see this after having 2 hospital births.

Doctors are trained to see everything in the Worst Case Scenario.  When you have a hospital birth you may not walk around—you must be hooked up to the baby monitor.  You may not eat or drink—you need an empty stomach in case they have to do a c-section.  And once that little person hits the birth canal, look out- the hospital staff WILL deliver him/her within minutes, whether you and the baby are ready or not.

More and more it seems that Doctors also are performing c-sections or inducing labor for “over-term” pregnancies and even (I think shamefully) inducing so a woman will deliver to suit his or her schedule.  Many of these “over-term” babies need to stay in the hospital or be treated for things that have traditionally been Preemie Problems.  Obviously they weren’t “done” at all.

Midwives are trained to see pregnancy and birth as something women were designed to do (radical, I know) by Someone much smarter than any Doctor, and that MOST of the time, things go just as they should.  They are there to help, but not run the show.  And in the natural scheme of things, that means the birthmother can do whatever she wants to do and the baby shows up when good and ready, which is sometimes a LOT longer than any medical staff can wait around for.

The birthmother in the video labored longer, but much less frantically than the hospital mother, and the whole thing was actually peaceful and made me feel all warm and fuzzy inside instead of queasy and nauseated.

The reason that was so important for me to see is that Master Alec lollygagged around in the birth canal for over 30 minutes (after 14 hours of pre-game show) before finally deciding to grace us with his presence.  Thalia assured me that this gave me time to adequately stretch  (midwives do not do episiotomies) and not to take it personally, although sometimes I wonder…

But I’ve jumped ahead to the last page.

Our homebirth was just about the hardest and best thing we’ve ever done.

Thalia and her partner, Linda arrived at our home just before midnight, after I’d been in mild labor for some hours.  They encouraged me to walk, eat, and drink to keep up my strength.  Once I was in labor I informed Ward that he was not to let go of my hand.  Ever.  And he didn’t.  Our original plan was for Ward to catch the baby, but even with his really long arms, that was not going to happen with him holding my hand.  I will admit that about 20 minutes before the birth, I just flat shut down.  I was tired.  More tired than I’d ever been in my life.  I decided that I couldn’t do it, and made that fact abundantly clear to all on hand.  Once I thought it through, though, I realized that if I trundled out to the car for the trip to the hospital, I’d most likely have the baby on the way.  And if I DID make it to the hospital, there I’d be back in the very environment I had wanted to avoid.  Armed with that knowledge, I first took a little nap (yes you can nap if you are tired enough), then with a final round of cheerleading from Ward and the midwives, Thalia delivered Alec at about 5:00 AM.  He did not cry.  It was warm and dimly lit in our bedroom.  No one was hurried or loud (except me, but that was before he arrived).  Since we hadn’t had an ultrasound, we didn’t know until birth whether we were having a boy or a girl and I was so exhausted and happy to see the little critter, I didn’t even check. Immediately  after the birth, Thalia did all the state-required measurements and testing, but no eye drops.  She uses a cloth sling to weigh babies in, not a cold metal tray that they roll around on, feeling like they are going to fall.

Once it was clear that all was well, the midwives packed up and left.  Ward made us breakfast, and we all went back to bed.

Included in our fee were 2, count them, 2 home visits from our midwife after the birth: one at about a week and one at 6 weeks.

Homebirth may be right for you if:

you can get your brain around the concept of childbirth without so much as an aspirin (trust me on this, as I am a Bona-fied Weenie when it comes to pain-if *I* can do it, anyone can do it)

When shopping for a midwife make sure she is state certified, has a partner she works with (just in case she has 2 births at the same time), and most importantly is someone who makes you feel comfortable and secure.  Your midwife should be someone you trust completely and love unconditionally.

There ARE midwives out there who are almost militant in their views: homebirth is ALWAYS better and they will NOT refer to a hospital.  Period.  If you encounter one of these, run away as fast as you can.

No matter how much you may want a homebirth and for whatever reasons, the most important thing you can do for your child is to get him/her into this world safely and securely.

Just as you shouldn’t have a hospital birth just because “they” say it’s safer, you shouldn’t insist on homebirth if all indications point towards the hospital.

Listen to your head AND your heart.

And do me a favor; kiss the top of that baby’s head for me.  Nothing is sweeter than a fresh new person. 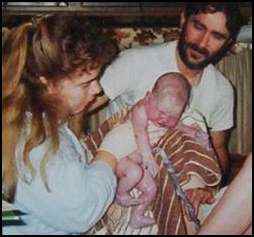 Midwife Thalia Hufton, baby Christina Shank and Christina’s daddy (mommy’s leg to the right of the frame) at Christina’s “coming out” 12-29-94