Evolution of the Kitchen: From Campfire to Cuisinart (and Back Again?)

Home /Construction, History, Homesteading Life, Housekeeping, Lifestyle/Evolution of the Kitchen: From Campfire to Cuisinart (and Back Again?) 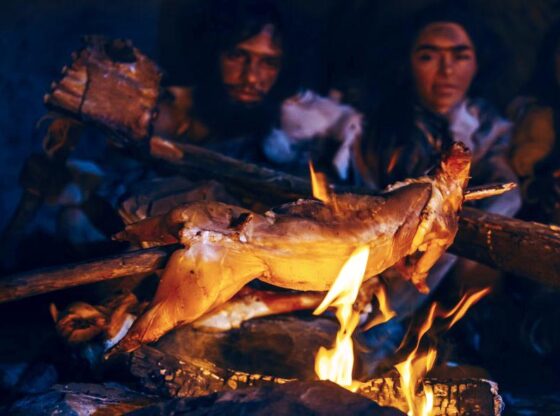 As we all know, the evolution of the kitchen — room, concept, purpose, and practicality — began on a camping trip. It was a camping trip taken by our earliest ancestors. After they made the most basic discovery: fire.

Fire was as much a part of our ancestors’ lives as sunshine, trees, animals, and water. It would not take long for people (even apes, who as it turns out, prefer cooked meat to raw) to figure out that fire hurts and kills. It destroys in massive movements. Yet, on a cold night, being near one has its advantages. It gives light, for one thing, and provides protection from wild beasts. Then, maybe someone accidentally dropped a freshly killed antelope onto a bed of smoldering coals. However it happened, scientists tell us that the oldest evidence of “controlled fire” is in Kenya, dating from the early Stone Age. The control can be related to the need for warmth, the need for destruction, perhaps, of unwanted vegetation, and the need for food. Every time something fell in the fire and came out tasting good or just easier to eat, a new recipe was created. Think, “ear of corn.”

So the kitchen began outdoors, and stayed that way, among our most direct ancestors (Africans, Middle Easterners, early Europeans) for a lot longer than might have been expected. Long after houses, huts, yurts, lean-to’s, tipis (teepees), and tents were in use, cooking was still done outdoors. And indeed, even after pretty sophisticated houses with a variety of rooms of differing purposes were being constructed, the cooking was still outside. It was changing as other important aspects of survival changed, however. Metal created pots, pots got lids, and some early food genius realized that great things happen when you combine food—almost any food — with water. In a pot. With a lid.

But still… no dedicated “room.” Cooking was done by women almost certainly and always because the men were out killing the food. Except… well, I don’t want to get too belligerent here, but women ALSO brought in the food, and planted and tended and harvested the food, while tending to the babies and making the clothes… and, well, just about everything else, while the men were laying about bragging about who killed the biggest rabbit or speared the longest fish…

In Greece, cooking was done in an “area” outside, known as an atrium, and in some places, cooking, like laundry, was communal; that is, fire and water were protected and controlled by the group. Many peoples all over the world developed a sort of space for cooking, with a way to keep warmth in and pipe the smoke out through a hole in a roof-like covering. By the 1800s in Europe and the new Americas, people were no longer so nomadic and many of them chose to settle in a fixed location. They built houses that gradually evolved.

How gradually, how long it took for houses to have bedrooms, bathrooms, “living” rooms, kitchens, and bathrooms (a.k.a. pooping places) can be illustrated by the very house my husband and I occupy right now. It was built in 1915, in Mayberry (Mount Airy, NC) as housing for mill and factory workers. Originally, it had three rooms, two of which were adjoined by a double fireplace (now walled in but still noted by the chimney that peeks through the roof). One of the two fireplaced rooms was the kitchen, the other was the bedroom, and the third room, with doors into both of the other two, was a meeting, eating, sitting room for the whole family, however large. As noted in an earlier Homestead.org series (“The Other Little House: The Poo Papers”), people here, and in most small American towns, went to an outhouse to relieve themselves, probably up into the 1950s when “city water” was piped in and the modern, if minuscule, bathroom came indoors, evidenced by little exhaust pipes sticking out of the roofs of little tacked-on rooms in our neighborhood.

The word “kitchen” has clues to the development of the room by that name. Here let us consult Merriam-Webster:

“Although a room where food is cooked is called a kitchen, the words cook and kitchen are so different that it is surprising to learn that they both come from the same source. Both words can be traced to the Latin verb coquere, meaning ‘to cook.’ The connection between coquere and cook is easy to see, but kitchen has a more involved history. From the verb coquere came the later Latin noun coquina, meaning ‘a kitchen.’ With some changes in pronunciation, coquina came into Old English as cycene. This became Middle English kichene and finally modern English kitchen.”

One thing is clear from this etymological explanation: the kitchen, as we know it, grew up in Europe.

Yet even in the New World, early settlers, rich and poor, kept fire outside (a pretty smart idea when you think about it). The occupants of grand plantation mansions were served sumptuous meals cooked in a separate, crude building, over an open, wood-fueled fire. In the late 1800s, stoves of cast iron, fed with coal, with grates on top, were being invented and used, especially in cities, where flame cooking was dangerous, if not impossible. As with many inventions, one idea “sparked” another and by the early 1900s, stoves had enamel exteriors and might be powered with gas and then — ta-da! — electricity. With electricity and gas came cold storage, too — the end of the Ice Age, for real. Then, and only then, did the kitchen as we recognize it today come into its own.

Married to the convenience of water piped separately into dwellings, and electricity wires popping out along every street, the kitchen could be dictated by the needs of housewives who knew their place — their domain, where food was stored, dishes were kept in readiness, and cooking and cleaning could happen. My grandmother had such a room in her small Kentucky home: a woodstove, replaced by electric at my mother’s insistence, a free-standing baking cabinet, a large, ugly but utilitarian sink, and a small pantry tucked in on the way to the backdoor stoop, where food leavings were scraped off for the chickens. It was a room with furniture, like the other rooms.

But the kitchen that many of us knew in our childhood was the result of an expansive architectural boom, a post-war phenomenon known as “moving to the suburbs.” Hearing what their wives were saying (and demanding), architects worked with construction companies to create built-ins. Cabinets had drawers below and shelves above, and smooth open counters abutted stoves, refrigerators, dishwashing machines. Some counters had an overhang allowing for stools, and soon many houses were graced with what was proudly advertised as “eat-in” kitchens. All was cleanable and seamless.

Apart from stools or chairs and a single table, any of which might also be “built in” diner-style, the kitchen no longer had — no longer needed — furniture. Yes, the formal dining room so beloved of royalty and rich folk, could remain for “special” occasions. The home of my affluent upbringing had such a room, perhaps utilized twice a year, while breakfast, lunch, and supper were all adequately dished out in the large kitchen with its big oval table. We could smell the food as it cooked, reach handily into the fridge when more milk was needed, and cleaning up, though we griped about it, did not require leaving the safe, friendly kitchen.

The second half of the twentieth century was probably the glory era for the kitchen. It was often depicted in TV sitcoms, the province of a female (men never cooked in those years, at least not on TV). Children ran through, had after-dinner snacks or marched in to get their school lunchboxes. There was always something going on in the kitchen.

Those returning to the land and simpler ways may choose to reinvent the older form of kitchen: a room with furniture, fire, and a connection to the outdoors. They may build a shell house to be furnished as they please, with vintage cabinets and hand-hewn shelves. They may discover a cute, retro, ‘50s house with all its built-ins waiting to be filled. Or they may shelter in the now highly-desirable “tiny houses” with an efficient, teensy alcove kitchen featuring barest built-in necessities. But one thing is undeniable, whatever lifestyle we choose: the kitchen’s grand hey-day is passing, to live mainly in pleasant memories.

Kitchen conveniences like mini-microwaves, tiny fridges, and pod coffeemakers are the things of the present. Bulk and delivered foods being tested out (successfully it seems) in our current time of Covid crisis, will doubtless reduce the need for that big, yet cozy, space intended for food storage, meal preparation, and communal dining. And families have different patterns, too: moms work as much as dads outside the home; children have (or hopefully will soon have restored) a multitude of activities off of the property; and most tellingly, all most people want to do anymore is find a spot to be alone and stare at a glowing device (not a fire!) that miraculously contains, or so it may seem, the entire universe in a few square inches.

But let us not, as we scramble for new ways to face the future, forget the past, and the time-honored reasons for cooking outdoors, on open flames. Many of us have taken this up as a favorite hobby or a family tradition, even in the ‘burbs. My husband, Donnie Dobro (as he is known to his music cohorts), has recently built an outdoor fire pit, and grills and twirls up the best marinated chicken we have ever put tooth to, reacquainting us with the mysterious “taste” of smoke, and the virtues of iron pots and stone grilling surfaces. As I sit with him and watch real smoke rise through real trees and into the real night skies, I could almost wish for a new Stone Age.

Darkness Tomorrow — No Electricity for A Year
The Simplest House of All: The Dacha Series