There’s Something About Rosemary

Home /Herbs/There’s Something About Rosemary 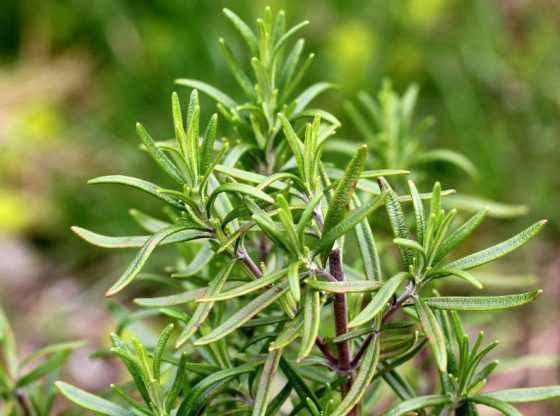 Just the name evokes mystery and romance. Its Latin name means literally “dew of the sea” and this herb has been steeped in traditions and folklore for centuries. The Roman, Pliny, recommended rosemary for failing eyesight, jaundice and the healing of wounds. Although it was introduced to England by Queen Philippa of Hainault in the16th century, it already had been mentioned in an Anglo-Saxon Herbal of the 11th century.

The students of Ancient Greece supposedly wove twigs of rosemary in their hair to help them remember for examinations. In the Middle Ages, people depended on sprigs of rosemary to ward off demons and evil spirits. In some parts of Wales, mourners at funerals are still given a sprig to be cast on the coffin as it is lowered into the grave, for rosemary is best recognized as the herb of fidelity and remembrance. Because it is the symbol of friendship, remembrance, and love, it has also traditionally been a wedding guest. Brides wore wreaths woven with rosemary or carried it in their bouquets. Anne of Cleves wore such a wreath at her wedding. A rosemary branch, richly gilded and tied with silken ribbons used to be presented to wedding guests.

The sea-sprayed hills beside the Mediterranean, Portugal, and northwest Spain are some of the native habitats of the herb. It is a half-hardy evergreen perennial that likes a sheltered, sunny position. It prefers light, well-draining soil and the most important thing I can say about growing it is DON’T LET IT DRY OUT. Its many tiny, shallow, hair-like roots are especially susceptible to dry conditions. Once the plant becomes too dry, it will not recover. On the other hand, make sure the soil drains well also; soggy soil is sure death to rosemary because wet roots will cause a fungal disease. A year-round covering of the soil with mulch will help protect the root system from both cold and drought. It responds well to manure tea or fish emulsion. In times of drought, rosemary will especially benefit from a brisk spraying of its tops. This will freshen up the plant and discourage red-spider mites which are the only insect problem rosemary seems to attract.

It can be grown from seed but the seeds are slow to germinate. The seedlings may require up to three years’ growth before blooming. The easiest way to propagate rosemary is by cuttings or layering of the lower branches of an older plant. If a plant makes it through our sometimes difficult winters, you may discover some branches naturally layering at the next summer’s end. These may be detached from the mother plant and potted up separately. If you are fortunate enough to live where winter temperatures are more reliable, another way to propagate an older, well-established rosemary is by root division.

There are two forms of rosemary but both are Rosemarius officinalis – the upright and the prostrate. The upright varieties are bushy with stiff branches that dip and curve with age. A hedge of upright rosemaries is a lovely sight when in bloom. Uprights may attain a height of six feet in their native surroundings; here in the South, they usually grow to three or four feet. As the name implies, prostrate is a sprawling plant; it grows to only twelve inches but the twisting contortions of its branches are just as delightful to the eye as its piney fragrance is to the nose. Leaves on the prostrate varieties are generally shinier, smaller and more dense in appearance than upright varieties. This plant is a heavy bloomer and makes an attractive hanging basket.

To enjoy the spiky, highly-fragrant leaves of this herb in your garden, try to find a sheltered situation: at the base of a low wall facing south in well-draining alkaline soil is the ideal growing condition. In fact, if you suffer from capricious weather with temperatures that fluctuate widely from one extreme to the other, you might consider keeping your rosemaries in pots year round. Just set the pot in the ground when springtime comes around and then lift for removal to a cool, sunny spot for over-wintering. If you take companion planting suggestions seriously, grow your rosemaries beside sage, dill, and cabbage. The blossoms of rosemary are quite attractive to bees. The flowers may be white-rose, lavender, pale or dark blue, depending on the variety you are growing. They are only a half-inch long and grow in clusters of two or three along the tips of the branches. Their appeal for me is the fact that my rosemaries are usually blooming prolifically in February, the dead of winter.

Herb nurseries usually have several varieties available. These might include: R. O. Albiflorus, a white flowering cultivar; “Tuscan Blue”, a fast-growing, broad-leaved variety that sometimes starts flowering in February (which is the variety I grow); “Benenden Blue”, with fine leaves and rich blue flowers; and “Santa Barbara” or “Majorca” —both with pink flowers. “Arp” is a cultivar discovered some years back by Madeline Hill to be hardier in the south and as far north as the Washington, D. C. area. Whichever variety you decide to grow, rosemary is guaranteed to bring much pleasure and provide a source of enrichment to your life.

Down through the years, rosemary has made an important contribution medicinally, culinarily, and for personal purposes. Modern scientists have found that compounds in the herb, the antioxidants as they are called, can retard the onset of rancidity and spoilage of meats. Long before refrigeration, the herbalists of old were well acquainted with this quality of rosemary.

In cooking, rosemary is a complement to may other herbs including chives, thyme, chervil, parsley, and bay. Be careful when using rosemary, as it is strongly flavored. A little goes a long way. But do use it to enhance tomatoes, spinach, peas, mushrooms, squash, cheese, eggs and lentils. Add to breads and rolls, cheese spreads and butters. Use as a marinade for red meats or rub the meat with the leaves before cooking. Stuff a chicken you plan to bake with a couple sprigs for a delicious and unusual flavor. A robust salad dressing can be made by steeping a few sprigs in an olive oil, garlic, and vinegar mixture.

Rosemary jelly is delicious as a glaze on roasted meats or sautéed carrots or peas. Use the flowers for garnishing, as they also are edible. Rosemary may be also dried for future use. Just lay branches in trays or even stand in an empty vase. Make certain they get good air circulation and are out of direct sunlight. In a couple days, they will be dry enough to strip from the branches and stored in airtight containers. Or freeze whole sprigs of rosemary, taking off only as many leaves as you need at use time. Just remember, frozen or dried, rosemary’s seasoning ability is more concentrated than when fresh; use half as much.

A digestive and strengthening herb, rosemary is considered an important medicinal herb with a long history of beneficial use. In 1525, Bankes’ Herbal said, “Take the floweres thereof and boyle them in fayre water and drinke that water for it is much worthe against all manner of evils in the body.” Quite a recommendation! An ointment made from the oil of rosemary is said to benefit those who suffer from rheumatism, sores, eczema, bruises and wounds. Queen Elizabeth of Hungary was said to have been cured of paralysis of the joints (arthritis? rheumatism?) by rubbing them with Hungary Water, made from rosemary oil and alcohol. An infusion of leaves has been recommended in the treatment of depression, headaches and muscle spasms.

Its best known therapeutic qualities are for the hair and scalp, but rosemary helps all functions of the head, both external and internal. Rosemary tea refreshes the mind and memory. By stimulating the brain and nervous system, it becomes a good remedy for headaches caused by feeble circulation. Rosemary tea, drunk warm, will relieve the nervous depression, colic, colds and headaches.

Cosmetically, rosemary oil is added to soaps, creams, lotions, perfumes and toilet waters. It has a volatile agent that gets the blood flowing under the skin. Use an infusion of rosemary to make a steam facial—it will perk up your skin and brighten your face. Rosemary oil is known to also have some antibacterial effects. Professional perfumers in the sixteenth century would be hired by wealthy men to beat together rosemary leaves and sugar, then heat the mixture over hot coals to scent and purify the air. Like rue, rosemary has been used in courts of justice as a preventative of the contagious jail-fever. Even during WWII, a mixture of rosemary leaves and juniper berries was burned in the hospitals of France to kill germs.

Considered effective relief for asthma sufferers and other affectations of the throat and lungs, rosemary is combined with coltsfoot, rubbed together and smoked as an herbal tobacco. Rosemary lends its fragrance in an important way to potpourri mixtures and its piney scent has been added to sleep pillows reputed to chase away nightmares. Rosemary oil has also been recommended as an insect repellant. Experiment sometime and rub some needles on your arms.

Whether you grow rosemary for the distinctive flavoring it adds to foods, for the revitalizing effect of a steaming bath, or because of the depth of color and vital growth it adds to your hair, grow rosemary in your herb garden. Even if just because its colorful history adds richness to your life.

A perennial evergreen shrub hardy to zones 8-10. Demands well-drained soil and loves full sun and good air circulation. Seed germination is very slow; preferable to get started with bought plants. Cuttings root easily and older plants will produce new plants by layering. Acidic soil needs an addition of wood ashes or crushed eggshells. Harvesting can be done throughout the year. Rosemary is a tender perennial in the North and should be brought inside or kept in a greenhouse for the winter months.

Due Dill-igence: Growing Tips For Dill