Due Dill-igence: Growing Tips For Dill 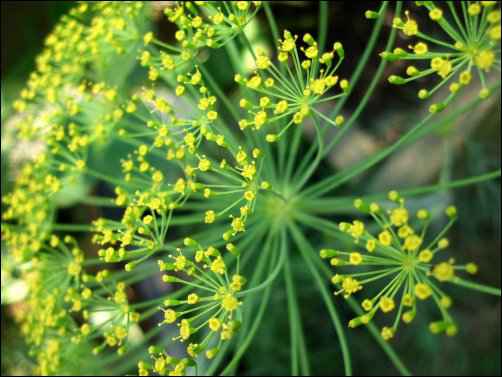 Sure, we’ve got growing tips for dill but first, a little history…

It is such a familiarity in our gardens, dill’s identity as an herb is also well established. The name comes from an old Norse word “dilla” which means “to lul”. Even back then, dill water was used to soothe colicky babies.

Although a native of southern Mediterranean shores and southern Russia, dill (Anethum graveolens) has been naturalized for centuries in many other countries. The earliest record of it appears on an Egyptian papyrus from 5,000 years ago. Romans wore crowns made from flowering branches of dill for their festivals; garlands crowned war heroes on their return home. In the first century A.D., Pliny listed nine remedies with dill as the chief ingredient. This herb is among those mentioned in Matthew 23:23 as being tithed. In 1578, Dodoens mentions dill being sown in all gardens among worts and pot-herbs.

As a drug, dill has been used by herbalists to dispel flatulence, increase mother’s milk and treat congestion in the breasts resulting from nursing. Dill possesses stimulant, aromatic, carminative and stomachic properties, making it of considerable medicinal value. In the Middle Ages, dill was one of the herbs used by magicians in their spells and charms against witchcraft.

hinder witches of their will.”

Mentioned by herbalists down through the centuries, the reputes of dill are well recognized. Virgil called it: “pleasant and fragrant plant, very easy to grow.” Piesse reported some ladies mixed dill water and rose water together as a simple cosmetic to clear the complexion. Culpepper said dill would strengthen the brain; Edmund Spencer called it “head purging dill.”

In 1629, Parkinson stated dill added to cucumbers “doth very well agree, giving to the cold fruit a prettie spicie taste or relish.” Because of its soothing effect, dill was one of the “meeting-house seeds.” Long sermons were made tolerable with a pocketful of seeds, dill among them to nibble on. An old German custom was for brides to carry dill although the significance of the practice has been lost through the ages.

The volatile oils of dill are stimulating to the system and soothing to the nerves. Dill is also said to have properties which strengthen the fingernails. European and American herbalists use both the leaves and the seeds to dispel flatulence, increase mother’s milk, and treat congestion in the breast resulting from nursing. Oil of dill is also employed for perfuming soaps. Chemical analysis shows dill contains calcium, phosphorus, and sulfur. The essential oils of dill differ in flavor and odor depending on whether they have been taken from the mature seed or the dillweed. Another variable is the maturity of the seeds. Dill is largely cultivated in Germany and Romania for commercial purposes. We also import quantities of dill seed from India and Japan. These countries grow a different variety which produces a difference in oils. Indian dill is widely grown in the Indies under the name of “Soyah”; it is mostly grown for the commercial use of flavoring pickles.

Besides its use as a food flavoring agent, dill is grown commercially for its seeds which are used in the manufacture of gin. The distilled oil is fragrant and combined with other essences is employed for perfuming soaps. Dill has a dominant personality and a well-rounded tang. In this country, dill is used mostly for making dill pickles. Many a housewife plant both cucumbers and dill to “put down” her own pickles. Dill Vinegar is also a popular condiment; the tops and leaves give a delicate flavoring. Use it to add variety to your French dressing.

Actually, dill makes a vital contribution to the cuisines around the world, both seeds and dillweed, as the leafy growth is called. Dill has been mentioned in connection with baking since the days of Methusela, or thereabouts. The seeds are often used in breads. The French use dill seeds for flavoring cakes and pastries and the Greek season spinach with dill. In Scandinavia, dillweed is an essential ingredient in the national dish of Gravlax—paper-thin slices of fresh salmon cooked in a marinade of aquavit, sugar, salt, fresh dill and cracked pepper. This is served with a mustard-dill sauce. They also use dill in apple pie, soups, gravies, potato salad, and some other fish dishes.

Dill makes a pleasant change for parsley; the fresh leaves taste a little bitter, penetrating, and stimulating. The flavor distinguishes it from fennel, which it resembles in appearance, because of its slightly peppery and spicy aroma. Try spreading leaves over a roasting chicken! Other foods dill can be added to include: new or mashed potatoes, cream cheese, white sauce, omelets, cooked vegetables, lamb, veal, and any fish or shellfish dishes. Dill seed added to gas-forming vegetables such as cabbage makes them easier to digest. Dill vinegar may be made by soaking the seeds in vinegar for a few days before using as a condiment.

Fresh and dried leaves are available commercially, but fresh is preferred. Whole seed is preferred over ground seed. Fresh dillweed has a short shelf-life in the refrigerator; drying or freezing your harvest will ensure a year-long supply. But to have a harvest, you must be growing and dill is considered very easy to grow. Propagation of this hardy annual is by seed. Either in the spring after all danger of frost has passed or, for southern gardens, a planting in late fall which will get an early start in spite of freezing temperatures latter. A freeze may remove all signs of growth to soil levels.

Plants thrive in a warm, sunny, rather protected spot, in sandy, well-drained, moderately rich loam. Dill benefits from generous amounts of well-rotted manure worked into the soil before planting. Sow seed thickly and do not thin seedlings. This allows the tall, spindly stalks to lean upon one another for support. All the books advise “do not transplant”, but this can be done if the single, slender taproot is moved when the plant is less than five-six inches high. Dill will tolerate some afternoon shade during the hot summer southern days as we experience. Keep your dill bed well weeded as it does not like competition.

Dill grows to three feet in height—plan to either stake the plants or sow seed thickly so they can support one another. The plant is upright, branching out from a single stalk with feathery leaves called “dillweed.” Once the plants are well established, you can begin harvesting the leaves close to the stem. Use as soon as possible, dillweed last only a couple of days in the refrigerator before it droops and loses its flavor. Stems are smooth, shiny and hollow; foliage is almost a blue-green in color. Plants produce delicate umbrella-like clusters of small yellow flowers which mature to dill seed in midsummer.

It takes two and a half months from seed-planting to harvest of mature seed. Seeds will be light brown in color when ready to harvest, anywhere from two to three weeks after blossoming. The seeds will be a light brown color. When most of the seed-heads have turned brown, cut the stems with enough length, tie in a bunch and hang in a dark place. Spread newspaper beneath them to catch the dried seeds as they fall. If seeds do not fall after being dried, they will pull off by hand easily. When completely dry, rub between the palms of your hand to remove seed from chaff.

The plant is self-seeding and dropped seed will germinate easily. Store harvested seeds in airtight containers; seed can retain its germinating capacity for up to three years. The whole plant is aromatic and bees are attracted to the pollen-laden flowers so place it on the perimeter of your garden to avoid confrontations. Companion planting has some dos and don’ts: dill will enhance the growth of cabbage, onions, corn, lettuce, and cucumbers. But don’t plant it near carrots, fennel, parsley, and anise.

To grow indoors, it will need full sun, prefer daytime temperatures be in the sixties, can take nighttime temperatures as low as mid-forties. Water whenever the surface appears dry and provide good air circulation. Seed directly and then thin to three plants in a six-inch pot. This will produce new growth for two to four months indoors. Harvest lower leaves after plant is a foot tall. The best cultivars for indoors are “Aroma” and “Bouquet” but be forewarned, dill is difficult to grow indoors. There is a variety of dill called “Bouquet” which produces shorter and bushier plants than the better-known A. graveolens.

The following comes from the Receipt Book of Joseph Cooper, cook to Charles I, 1640:

“Gather the tops of the ripest dill and cover the bottom of the vessel, and lay a layer of cucumbers and another of dill till you have filled the vessel within a handful of the top. Then take as much water as you think will fill the vessel and mix it with salt and a quarter of a pound of allom to a gallon of water and poure it on them and press them down with a stone on them and keep them covered close. For that use I think the water will be best boyl’d and cold, which will keep longer sweet, or if you like not this pickle, do it with water, salt and white wine vinegar, or (if you please) pour the water and salt on them scalding hot which will make them ready to use the sooner.”

One last note—the intricately complex flower-heads can also be harvested for use in fresh flower arrangements. But do allow some plants to form seed-heads to be used in dried arrangement for your fall decorating.

Dill is a hardy annual and grows easily from seed; transplanting is not always successful. Seeds may be planted in early fall and in early spring. It requires moderate rich, well-drained soil in full sun to flourish. Sow in place early in the spring after danger of frost is over. Dill’s taproot is singular and spindly like a carrot. One long, hollow stalk comes from the root. Plants can grow to a height of three feet. Its stems are smooth, shiny and hollow. Dill may not produce seed until the beginning of the plant’s second year. Dill has a tendency to wither in the summer’s heat. Its flowering season is from July through September. Weeding is the only care required.

An Early History of Rock: Precious Asset, Homesteader Headache, or The Giver of All Life?
Whole-wheat Irish Soda Bread