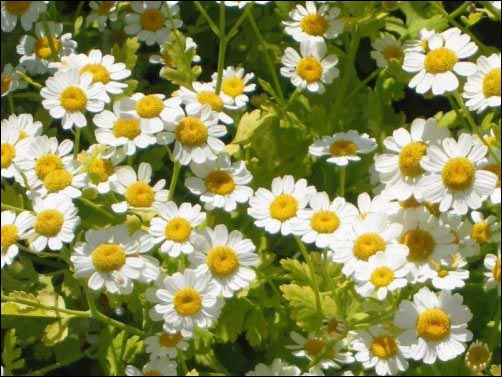 Since the time of Plutarch, feverfew has been used in the Western world as a medicinal herb.  One source states its name comes from the Latin febrifugia which means “driver out of fevers” and honors the traditional use of the plant for treating fevers.  Its use against fever has been well documented.  Feverfew originated in the mountain scrub and rocky soil of the Balkan peninsula.  It has since become native to central and southern Europe and naturalized in most parts of the temperate zone, including North America.

The early Romans believed in its powers and used a decoction of the flowers as a cosmetic wash.  In ancient Greece, Dioscorides often used it to help in the delivery of the placenta if contractions were not regular.  It was thought that drinking the tea would also strengthen the womb.  However, feverfew should not be used during pregnancy, for it may trigger a miscarriage.

As early as 1633, Gerard recommended it as a headache remedy.  He tells us that feverfew may be used both in drinks and bound on the wrists as a virtue against the ague.  The 1787 Dublin edition of Culpepper’s Complete Herbal affirms it as a traditional treatment for headaches.  Being well acquainted with its effectiveness, Victorians grew this hardy perennial as a medicinal herb, sometimes making a wreath of the leaves to wrap around the head of a headache sufferer.  A decoction of the flowers, mixed with wine and nutmeg, and taken often throughout the day, was used by women for nervous conditions. 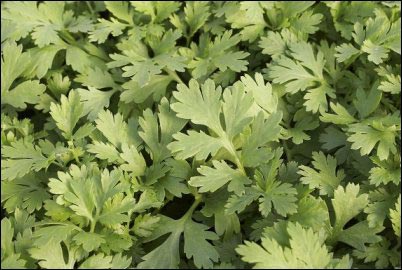 A popular painkiller in the eighteenth century, a decoction of the leaves was drunk as a tea for hysteria.  It was thought that drinking the tea would also strengthen the womb.  This herb lost its standing for a time but recent research has underscored its effectiveness as an anti-inflammatory and migraine headache cure.  John Parkinson claimed it aided in recovery from opium overdose.  Even American Cotton Mather recommended it for toothache.  In South America, where it is naturalized, it has been effective for colic, stomachache, morning sickness, and kidney pains.

Long recognized for its ability to aid “melancholy and aches and pains in the head,” in Wales, this herb is recognized as a relief for migraine and arthritis.  Researchers speculate that substances in the plant appear to smooth muscle cells that trigger migraine muscle spasms.  “If you take feverfew leaves for migraine headache relief, it should be just three or four of the little leaves each day,” suggests Varro Tyler, PH.D. of Purdue University.

In recent years, modern science has had this herb under the microscope.  Research studies have proven the effectiveness of its traditional heritage.  Bypassing the normal process of animal studies, researchers sought volunteers who were already using feverfew for self-treatment of migraines.  One study examined the effects of withdrawal from the herb by self-users.  Another study addressed the herb’s value in preventing the symptoms of migraines.  Based on the findings of these various studies, feverfew is now being promoted as a welcome relief for migraine sufferers.

Although it has been readily available in Europe for some time, only recently has it been sold in our health food stores as an effective headache remedy.  Taken daily over an extended time builds resistance to migraine headaches.  Preliminary studies show that both the dry and the fresh form have a strong effect.  Because of its bitter taste, you might want to mix it with other foods.

Herbalists have also recommended it for toothaches, as a relief for menstrual cramps and to ease the discomfort of hay-fever.  Native to central and southern Europe, this herb has naturalized in most parts of the temperate zone.  It is employed as a digestive aid in Costa Rica and Mexicans use it as a sitz bath to regulate menstruation.  A Cuban variety is used as an anti-periodic.

Feverfew is now identified as Chrysanthemum parthenium, but may also be known by its older name Pyrethrum parthenium.  Pyrethrum is derived from the Greek pur (fire) in allusion to the hot taste of the root.  Tanacetum or Chrysanthemum parthenium, depending on which reference you use, is a hardy perennial and considered a weed in Europe.  It needs a minimum of care; ordinary well-drained soil and full sunshine will provide for its needs.  Once planted, feverfew gives year after year an abundant supply of blossoms with only the merest degree of attention.  Sow feverfew seed in the spring in an open sunny location for bloom by midsummer although it will tolerate some shade.  Space your plants nine to twelve inches apart; it will eventually grow to form a rounded mound two to three feet tall.  This easy-to-grow herb’s delicate green leaves remain conspicuous all winter in our East Texas area and could be used as a perennial border.

Sweet Feverfew, Chrysanthemum suaveolens, and C. maritima, found on northern seashores have a broader leaf with more fleshy, succulent and smaller flower-heads than the Common Feverfew.  Height ranges from one to three feet and features small white or yellow flowers.  There is also a variety known as “Aureum” or Golden feverfew (Tanacetum parthenium.)  It has single white flowers and aromatic golden-green leaves.  Growing only to twelve inches, it makes an attractive edging plant.

The best time to plant is in spring and any ordinary good soil is suitable.  Best results come from well-drained, loamy soil enriched with manure you can propagate this herb by seed, cuttings or root divisions.  Sow seed in February or March.  The seeds should be pressed into the growing medium (rather than covered) as light enhances their germination.  Allow a foot or more between plants; they will establish themselves quickly our climate allows for plant division both in fall or spring.  Take your cuttings by pulling some new shoots of the old plant near the base being certain to include a part of the heel any time from October to May.  Cut back foliage to about three inches to encourage root development.  While cuttings develop their new root systems, keep the plants shaded.

Plants can be divided in spring or fall.  Once established, feverfew will self-sow freely and requires only the most casual methods of cultivation.  Feverfew is useful for window boxes and small flowerbeds because of its compact size.  Pinching back the flower buds will encourage bushier and more vigorous leaf growth.  The leaves are harvested just before the plant flowers in midsummer through fall.  The aromatic flower heads are dried and powdered and used as an insecticide in many commercial products.  Sometimes the plant will die after going to seed.  One caution: do not plant feverfew near other plants that you want the bees to pollinate.  The bees dislike this plant’s fragrance and will stay away.

Suggesting another attribute of this useful herb: feverfew makes an effective insect repellant.  Although the bitter scent suggests its past use as an aromatic to ward off diseases, one of its ingredients, pyrethrin, may be the clue to its insecticidal usefulness.  Mixing two teaspoonfuls of a tincture with one-half pint of cold water will result in an effective repellant to apply to your own skin.  Keep a tincture of this herb handy to alleviate the pain and swelling caused by insect bites.

In its long history, this herb has been used as an ingredient in making confections and wines; as an aromatic to ward off disease; and as an insect repellant.  Generally used for head pain, fevers, colds, to expel worms, it is also considered as a remedy and antidote when too much opium had been used.  A decoction with sugar or honey is said to be good for coughs, wheezing and difficult breathing.  An infusion of the flowers made with boiling water, then allowed to cool, will ease earaches.  The herb, bruised and heated has been employed as a warm external application for wind and colic.  Recently rediscovered as an anti-inflammatory and migraine headache cure of remarkable power, Feverfew is now being promoted as a welcome relief for migraine headaches.   Preliminary studies show it to have strong effect in both fresh and dried forms.  To hide the bitter taste, some migraine sufferers mix the leaves into foods.  But be forewarned: chewing feverfew may cause the development of sores in the mouth or on the tongue in some people.  The leaves may be frozen but lose some pungency if dried. 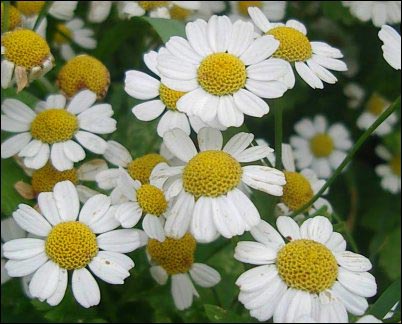 This herb isn’t considered a culinary plant although the young tender leaves do add contrast in a fresh salad and the flower-heads may be added to dried winter arrangements.  A tea made from the flowers has been used as a sedative and a tonic.  Feverfew has a long history of use as an ingredient in making wine and confectioneries.  Even the roots are sometimes dried and ground as a coffee substitute.  The fresh leaves and stems produce a greenish-yellow dye in wool mordanted with chrome.  In the language of flowers, feverfew signifies: “you light up my life.”

A composite plant growing in every hedgerow, this is one herb I hope never to be without as I can personally testify to its effectiveness in relieving previous migraine headaches.  Feverfew is a compact-growing plant and adapts well to small flower beds and window boxes.