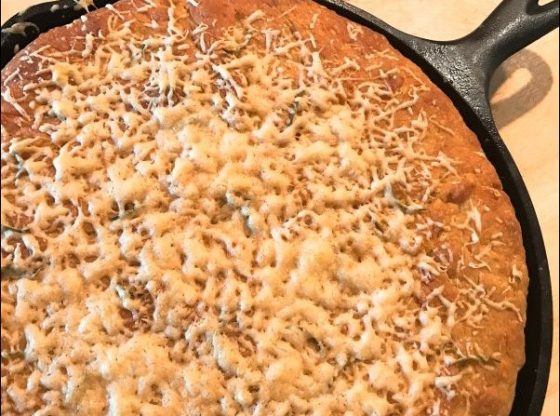 Well, folks, I did it… sort of.  I made yeast bread!  Those of you who have been with me for a while know my trepidation about baking bread.  So many variables, so much precision, and, frankly, so much work have made me shy away from baking real bread for quite some time.  But I found the perfect recipe for scaredy-cats like me.  This bread, while still benefiting from the airiness and chewiness that yeast provides, requires very little actual work on the baker’s part.  Plus, I get to use one of my very favorite kitchen tools: my trusty cast-iron skillet.  The resulting loaf is chewy and soft on the inside, but with an all-over crispy, golden crust thanks to that wonderful cast-iron heat.  I even learned a fool-proof way to make a proofing box out of my oven that works beautifully.  So, if, like me, you’ve long avoided baking bread, give this No-knead Rosemary-Parmesan Skillet Bread a try.  It’s the perfect recipe to bolster your baking bravery.

In a large mixing bowl, dissolve the yeast and sugar into the warm water.  I highly suggest using a thermometer to make sure the water is not too warm and not too cool to activate the yeast, especially if you’re a novice, like myself.

Wait about 5 minutes until the yeast blooms. You’ll see the water get foamy and cloudy.  Measure the flour (by weight is best), stir in the salt, and add half to the yeast water.  Stir with a wooden spoon until combined.  Add the rosemary, 1/4 c. of the cheese, and the rest of the flour.  Stir again until fully combined.  With the spoon, father all of the dough in the center of the bowl and cover the bowl with plastic wrap.

If your home is warm and humid already, you may be able to skip this step, but I found it worked perfectly to create the best environment for my dough to rise.  Place one rack in the middle of the oven and the second below it.  Place a 8×8 or similar baking dish on the lower shelf.  Bring 3 c. of water to a boil and pour it into the pan.  Working quickly (to conserve as much heat/steam as you can) put the covered bowl of dough on the rack above the water pan and close the door.  Let the dough rise in the oven for about a hour, or until it doubles in volume.

After the dough has risen, brush your cast-iron skillet with olive oil and set aside.  Flour your hands and the dough just enough to fold it out into the oiled skillet (remembeer this is no-knead bread).  Gently shape it into a disk, but don’t worry about perfect symmetry.  Dust the top with flour (just to prevent the towel from sticking) and cover loosely with a dishtowel.

Boil another 3 c. of water to replace what is in the pan in the oven.  Place the skillet above the pan as before.  Let rise another 30-45 minutes until rounded and “puffy”.

Remove the skillet from the oven and turn it on to 400.  While the oven heats, brush the top of the dough with olive oil and sprinkle with rosemary.  Bake for 20 minutes and remove from the oven to top with the remaining Parmesan.  Return to the oven for another 20 minutes, or until golden.

Remove from the oven and allow to cool in the skillet for at least 10 minutes before slicing.  Store your No-knead Rosemary-Parmesan Skillet Bread an airtight container. Serve it up with this Savory, Summer Minestrone.

Raising Animals That May Try to Eat You: A Pastured Pigs Experience
A Homesteader’s Guide to Covid-19 Coronavirus: This is Not a Drill