Guinea Fowl: Something Different in the Garden

Home /Poultry/Guinea Fowl: Something Different in the Garden 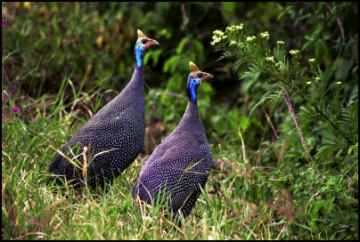 An exotic and perhaps odd-looking breed of poultry, the Guinea Fowl, is fast becoming not just the friend of the poultry farmer, but a friend of the avid gardener as well. Guinea fowl, weighing in at no more than 4 ½ pounds apiece, hail from the Sub-Saharan regions of West Africa. The domestic, modern stock has originated from the wild breed of Guinea Fowl (nuneda meagris), found as far south as the Eastern Cape Horn Regions of W. Africa. These domesticated fowl are found now in every region of the world.

These unusual birds are quite interesting in that their increasing role on the farm has taken on many purposes in today’s diversified livestock community. In addition to egg-laying and breeding stock production, one of the foremost uses for these animals today is for pest and rodent control. Guinea fowl, both male and female, are particularly adept at rooting out vermin such as mice and rats, and are even known to chase down and kill snakes. As well as keeping pests out of their environment, Guinea Fowl have been incredibly successful at ridding forested properties/farms of many types of bugs, particularly the deadly Deer Tick, which can carry Lyme Disease resulting in paralysis and death amongst other forms of livestock. This purpose in particular, has given the Guinea Fowl a widespread and excellent reputation, allowing the breed to rise above its former meat production-only function. Although raised for meat and considered a delicacy in Europe, the Guinea Fowl seems to, through their display of intelligence and multifunction, have risen above the stature of “meat-bird”.

These normally docile but alert birds have a surprisingly acute awareness of predators within their habitats, and will alert the farmer to any henhouse intrusion, day or night. A distinct and rather operatic call will be sounded upon any strange intrusion. Many Guinea Fowl breeders will attest to their “watchdogs’” ability of being able to distinguish between family members and strange and unfamiliar faces.

Guinea Fowl have been used for both pest control and as farm “watchdogs” for decades now, and one of their relatively newer uses has been to the gardener and small crop grower. Guinea Fowl have proven most successful in organically controlling pests by eating most bugs in the garden, while leaving the green foliage virtually untouched. This has garnered the Guinea Fowl not just the praise and welcome of the farmer, but that of the gardener as well. Slugs, bugs, and other thugs are their specialty and Guinea Fowl have demonstrated once again, their versatility and ability to earn a reputation of wonderful uses.

Guinea Fowl can be kept either free-range or free-run in the company of other poultry. They will usually group together if more than one of them are kept, even in a henhouse/run situation. Females often select their mate and then remain steadfast companions until death or separation. Males tend to be more vocal than females, making a sound that is described as the world “buckwheat”. Both the male and female are very similar in stature, and distinction. The only difference lies in the male possessing a slightly larger red appendage on his head; at first sight, males and females are difficult to distinguish apart from one another.

Guinea Fowl today come in a variety of colors, and Guinea Fowl breeders and enthusiasts are always breeding and looking for the newest genetic colorations. Their plumage is almost solid in color, with a fine dappling of white or cream specks. Variations in overall color range from browns, blues, violets, creams, whites, grays and charcoals.

Chicks are called “keets” and can be hatched as with other fowl, by a reliable incubator, by Bantam mother or a sitting hen of another variety. Their eggs are small, like the Bantam variety, and are hatched out in the standard 28-day cycle akin to other chickens. The suggested grower feed for the little keets is a medicated Pheasant/Turkey starter, and precautionary care with regard to warmth, drafts, and a dry environment as with other young birds is imperative. Guinea keets display themselves as very alert and hardy and seem to develop independence much more quickly than other chicks.

If you are interested in keeping something a bit different in the coop, & would like to eradicate the possibility of ticks and other harmful pests in the farmyard or garden, perhaps a pair of Guinea Fowl would be a successful addition to your own spread. Guinea Fowl will certainly be a conversational addition to any farm, and with their many successful uses around a country acreage, should result in being a hard-working member of the farm operation team.

The Secret of Inpangela: Guinea Fowl are Strong Magic for Your Homestead

How to Make Herbal Tinctures
Half-Caff Country: A Chicken Comedy