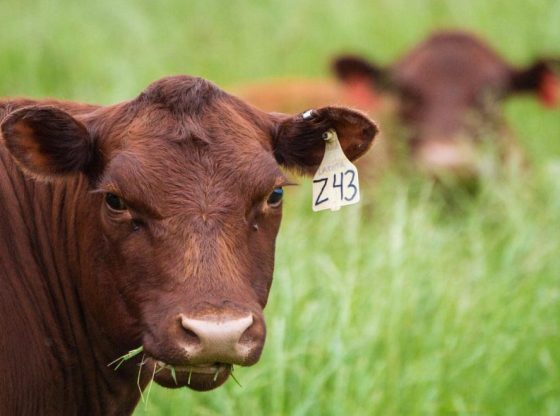 What are Heritage Animals?

Heritage animals are specific breeds of animals that are purebreds. They are not crossbreds. Their genetic make-up is passed down over generations. Some heritage animals (especially chickens) are also called “heirloom”.

Heritage livestock is the hardy livestock this country’s forebearers raised, worked with, enjoyed the company of, and ultimately consumed. They do best in a natural environment, are adapted to whatever climate in which you reside, and have been in North America for a long time.

Heritage animals are not production/commercial livestock which are grown in many ways that are unnatural: kept indoors and/or in confined spaces being overfed to grow quickly. All of this suits humankind’s desire for big production in a shorter period of time. It does not suit heritage animals or even humans in the long run.

Mass production of animals holds many turn-offs for those who wish to eat healthier, natural food. The over-commercialization of food-animals tampers with food-supply diversity. Continued food recalls due to unsafe food causes unnecessary slaughter and waste of food-animals every year. Creating hybrids that can barely move when it nears slaughter time stirs up many questions regarding the ethical treatment of living beings.

Many homestead heritage animals live a life true to the creatures they are, in quarters that allow fresh air, exposure to the elements, and within the company of humans and other animals, before being harvested in ethical, swift means. As opposed to mass-produced animals that (according to news reports and first-hand accounts) are raised and processed in manners that are not in alignment with those who prefer a more natural approach to obtaining their meat.

Now, on to the Devons. 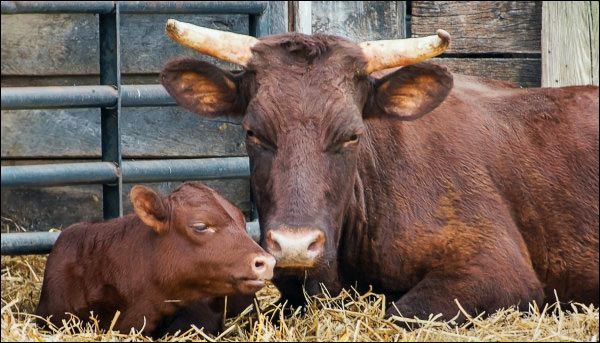 The History of Devon Cattle

There are 19 heritage cattle in the United States.

The modern breed was developed over a great deal of time (centuries) on the southwestern peninsula of England. Rugged terrain, huge weather fluctuations.

The Southern variety is mainly used for beef. The Northern breed is mostly dual purpose: milk and meat. The Milking Devon is a triple-purpose breed. They provide rich milk, exceptional meat, and all the right stuff to be oxen.

Throughout history, the Northern and Southern varieties have been two distinct breeds that derive from England. Crossbreeding occurred at times, but the two breeds are separate.

They are ancient breeds. The Romans recorded seeing red cattle as far back as 55 B.C. in Devonshire, England, and the surrounding areas. Celts, Vikings, Saxons, Phoenicians, and other ancient tribes are said to have brought cattle which blended with that local red cattle.

How did they end up in North America? This tri-purpose cow (milk, meat, and oxen), in regard to the colonization of New England, is extensively documented. They were the cattle of choice for the Pilgrims. Once you learn their long list of positive attributes, it’s not difficult to see why they shipped the first of these lovely creatures on wooden ships all the way to North America in the 1600s; two heifers and a bull to be exact. Devons were the first cattle from England to step foot on American soil.

Their temperament and ability to maintain condition on even the poorest of forage, made them an easy choice when settlers headed west. Devon oxen were key in pulling wagons over the Oregon Trail, Santa Fe Trail, and many more groundbreaking trails in the 1800s. I did not know that. Did you? When I learned this fact, I researched old photos of oxen on historical trails and sure enough… Devons!

Even George Washington was on the Devon bandwagon. Devons, and other heritage livestock, still reside at Mount Vernon today.

Why Did Devons Face Extinction?

True Devons are extinct in England, where they originated from. Crossbreeds carry their genes there now.

Despite their amazing qualities, there are less than 1,000 true Milking Devons in the United States. Red Devon numbers are higher.

Why? How did the cattle that supplied the founders of this country with milk, meat, and oxen almost vanish?

Before researching the answer, I thought that maybe it was disease or genetic issues that affected reproduction… something medical or scientific. Nope. It appears to be humans that almost made them disappear during the industrialization of America.

Even though Devons provide rich milk and superb meat-farmers began replacing them with Holsteins, Jerseys, Shorthorns, and other popular breeds for milk and meat. Tractors and such negated their use as oxen.

By the 1700s, Devons were extinct in their homeland England, and less than one hundred lived in the U.S.A.

Then along came industrialization. Mass production of almost everything modern humans use, including animals. Fast food businesses exploded. Factories and large meat production facilities wanted fast and cheap. Humans began to amp up crossing animal breeds to create hybrids to fit those criteria which meant phasing out heritage breeds to focus on animals that provided them with the most meat in the shortest period of time.

Decades of hard work by breeders and conservationists have brought Red Devons up to the Recovering status, while Milking Devons are still one of the most endangered bovines in the world. 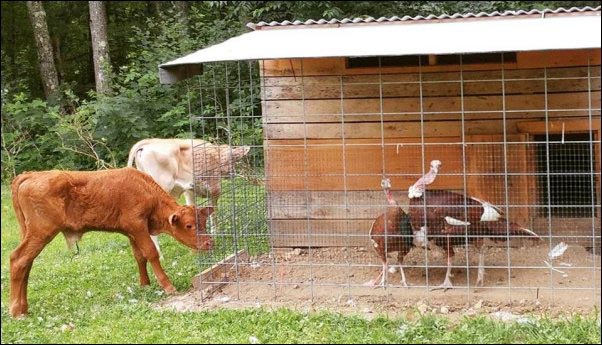 Devons in the Modern World

In modern times, Devons still possess all of the qualities they were prized for so long ago: intelligence, weather hardiness, docile, ease of handling, great oxen characteristics, ease of calving, great foragers, good mothering instincts and suppliers of rich milk, and delicious meat. Their super sweet temperaments sealed the deal for us.

Although registration of pure breeds is still low, crossbreeds are becoming more abundant. Dairy farms are becoming aware of the Devons value when it comes to crossbreeding.

When other breeds are crossed with Devons, farmers see a noticeable improvement in fertility, and overall health in the offspring. According to DevonCattle.com, research done over the past thirty years gives props to Devon cattle as being the superstars they are.

Many farms are crossing Devons with their existing cows through artificial insemination or live bulls.

Cricket Creek Farm in Massachusetts is where we met Devons for the first time. They produce award-winning cheeses, using the rich milk from their Jerseys, Brown Swiss, and Devon Reds.  They recognized the value of Devons and cross them with their Swiss and Jerseys.  We love what they are doing there!  Their mission is in alignment with our own.

“Our Mission is to produce nourishing food that honors our animals, respects the land, and feeds our community, and to exemplify a sustainable model for small-farm viability.”

Pure Devons or Devon crossbreeds are a smart option to incorporate into farms to improve the health and vigor of both dairy and beef cattle.

As we are seeking milk and meat, these two multi-purpose breeds fit. Add both breeds docile and sweet temperaments, they are a total joy to coexist with.

We do not have vast pastures for grazing. Instead, we cleared off small chunks of our property, fenced these areas in, and planted pasture seed appropriate for our climate. Just like big farms do with their huge pastures, we move our cows from one mini-pasture to the other as needed.

The great thing about Devons, they thrive on even the poorest of forage. Hay is crucial of course with limited pasture, but the point is-a family CAN raise a couple of heritage cows successfully and without huge financial output or extensive acreage.

I encourage everyone to look into heritage breeds in general. They all were crucial in our country’s past, help them remain in the future as well!

Chicken & Dumplings Casserole
How to Save Money on Taxes by Homesteading