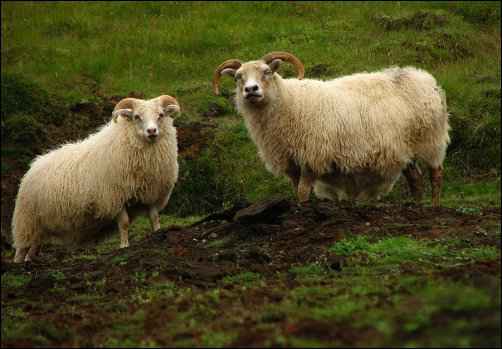 One of the oldest and most luxurious wool breeds of sheep is the hardy breed of Icelandics.  This particular breed, as the name suggests, originates from the harsh isle of Iceland and is one of the oldest sheep breeds, possessing a strong and prolific recorded lineage of over 1100 years.

The Icelandic breed of sheep is classed in the North European “short-tailed” group of sheep, with a naturally occurring short tail.  (The common practice of tail docking amongst other sheep breeds will result in disqualification from registration in North America.)

These clean-faced, silky-type, heavy-wooled animals are a mid-sized breed with short, stocky legs.  The wool is often varied in many beautiful colors such as grays, blacks, browns as well as whites and a variation of all these colors.  A spotting gene adds up to 90% of recognized and named coloration-patterns within this breed.  This is possibly the most eye-catching aspect of Icelandic sheep.

The wool of Icelandic sheep is considered a wool spinner’s dream because of the beautiful and naturally occurring coloration that distinguishes this particular breed, as well as it’s finer textured and soft feeling fiber.  The fleece is considered dual-coated, and will grow 6-8 inches in length in only six months.  The wool is also water-resistant; the topcoat or “tog”, protects the undercoat, providing the animals with much warmth and protection from the harsh winters in Iceland.  Tog is considered a true wool, and not a coarse guard hair that is normally discarded in other wool animals such as alpaca, llamas, and wooled goats.  The tog is crimped like mohair and is classed in the exotic wool variety, bringing premium prices both raw and spun.

Because this particular breed has evolved in one of the harshest climates on Earth, many breed traits have arisen from these sheep evolving and enduring centuries of temperamental weather and an unforgiving landscape.  One of the defining and most desirable of these qualities is this breed’s ability to survive on grass and browse/forage alone.  They are feed-efficient and cold-hardy with a strong immune system, and are considered very disease resistant.

Iceland is not a grain-producing country, and what little pasture and short growing season this small North Atlantic island possesses is given to growing hay for the up to 8 months of winter weather.  These sheep have a superior ability compared to other sheep breeds, in growing exclusively on pasture and hay.  In North America, pregnant and nursing ewes are supplemented with mixed grain feed, but in Iceland, the ewes are given fish meal, a readily and abundant source of protein and minerals available year-round.

Icelandic Sheep are a triple-purpose breed, used in Iceland for centuries for their meat, their wool, as well as their milk.  Sparse pastures unable to support larger animals in this cold region are unsuitable for keeping dairy goats or cows, and so these sheep were just as valued as milk-producing animals as meat and fiber.  In North America presently, the Icelandic ewe is catching the eye of the sheep dairy breeders.  The ewes produce an abundance of milk that are rivaling the commonly-used dairy-sheep breeds and are amazingly docile in learning to stand for daily milking.

Market lambs will reach their slaughter weight of 75-100 pounds by four or five months of age, without the need of expensive grain feed, making this breed an excellent choice for anyone looking to find a profit-turning sheep breed.  With the rise of the costs of grain, grass-based and dry-lot farms are on the increase in North America.  With Icelandic Sheep, the results for the amount of financial outlay, are excellent.

Icelandic ewes are excellent mothers, producing 2-3 lambs apiece, seasonally breeding in late October, and delivering normally with ease and high milk production.  Triplets are very common and the mothers are unusually adept at caring for all their offspring, unlike some other breeds that can only handle the care of no more than two lambs at a time.

One unusual factor of breeding in Icelandics lies in a gene that is specific to this breed, causing multiple births of triplets, quads, and even quintuplets which exist if the ewe carries two copies of this gene.  One copy of the gene causes milder fertility increases, but a double dose of this gene can result in more than three lambs being conceived and born in one birth.  This gene is called the “Thoka gene”, and it is named after the first ewe to carry the recognized marker.  This is similar to the Booroola gene found in the Merino sheep breed.

For superior fiber, economical feed production in meat, excellent milk yield, disease resistance, and so much more, the Icelandic sheep breed is certainly superior among its counterparts.  This breed has stood the test of time and earned a lofty position within the sheep and exotic animal communities.