Longhorns on the Homestead: They’re Not All Ornery Varmints

Home /Livestock/Longhorns on the Homestead: They’re Not All Ornery Varmints 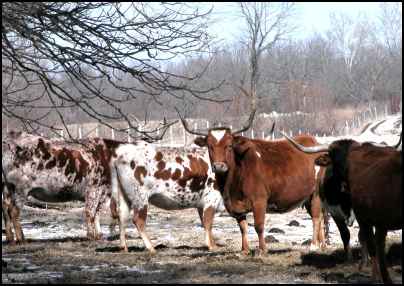 Large horns and wild, bright colors: these are the things that usually come to mind when one thinks of longhorn cattle.  Tales of the old west and cattle drives surround the legacy of this breed, yet to most people, it’s as distant as the pages of a history book.  It doesn’t have to be that way.

Longhorns are at least good as, and in many cases better, than your average Angus or Hereford.  Now, don’t think it could work as a replacement for a Holstein or a Jersey, because if you think that, you’re in for a surprise similar to what Pa Ingalls faced when he tried to use one as a milk cow in Little House On the Prairie.  They are, however, exceptional beef cattle for those who prefer more natural, hardy, and healthy, good-natured cattle that produce a high-quality meat product as well.

In today’s world, most people don’t even consider longhorns when looking for cattle to raise.  They are simply overlooking the versatility that this breed has to offer the homesteader; I do believe that the average homesteader would be pleased with the many advantages of longhorns on the homestead. 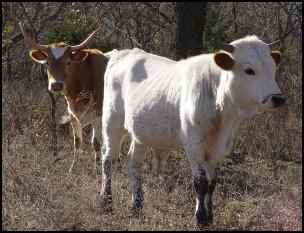 Today’s domestic cattle breeds were designed for a fast and meaty production in order to meet the nation’s beef consumption rates.  This means that these breeds took on a heavier-muscled and polled (no horns) appearance that was more suited to the grain fed diet and a feedlot lifestyle.  However, most homesteaders are not looking to run a feedlot or produce large numbers of butcher steers; they just want a cow or two that will work well on their homestead—a steer or two to butcher is just a bonus.  Longhorn cattle actually fit these desires better than any other breed.

Longhorns were bred by nature itself right here in North America.  They have a unique ability to utilize and browse prickly forage material on marginal rangelands in all kinds of harsh environmental surroundings.  In short, they survive without the pristine pastures and feedlot conditions that more popular breeds need. 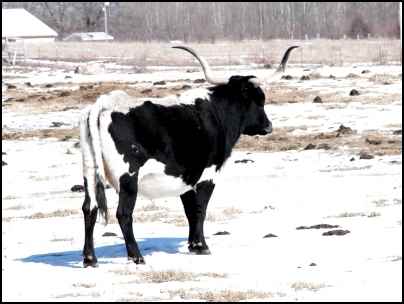 In the three years that we have raised Longhorns on the homestead, the only problem we have encountered was an abscess that developed where a horse kicked our bull in the jaw and even that drained on its own without any human assistance.  All of our cows have had a healthy calf each year that they were bred and never once required assistance in giving birth.  When you compare this information with our past personal experience of Herefords and Simmentals often having pinkeye and other commonly known problems, it is no wonder that we personally prefer the hardiness of Longhorns. 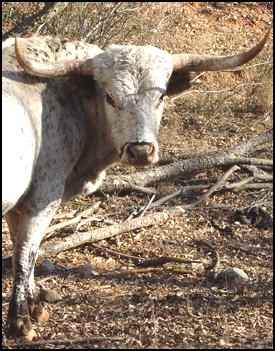 The docile nature of Longhorns is also unmatched in most other breeds of cattle.  Longhorns are typically very calm natured, perhaps this could be due to the fact they come naturally armed with a complete arsenal of weapons.  After all, if a quick kick won’t do the job, then, as anyone can see, they are very capable of using their immense horns for protection.  However, except under conditions such as wildlife attacks, a Longhorn is not likely to use his horns as a weapon.

In most situations, these cattle are curious and kind with little signs of ill temperament.  Around our property, you would more likely be hurt by accident than on purpose.  We can walk amongst our cattle with little problem; they do, however, show some excitement over a bag of range cubes.  That excitement has never been in any form of aggression, it is more demonstrated in forms of anticipation.  The desire for us to “hurry up and dump that bag” does not require any vocalization for humans to understand the importance of the act.

The demonstration of the docile behavior of Longhorns is often seen in the steers that people have broken to saddle and ridden in rodeos and parades.  My son has often contemplated this idea for the future of one of our calves, but the idea of good steaks has overruled that plan so far.  He does, however, have a respectful relationship with our bull; he can walk up to the bull anywhere in the pasture and pat him between his horns (for safety’s sake, however, please keep in mind that my son is 25 years old and not a child). 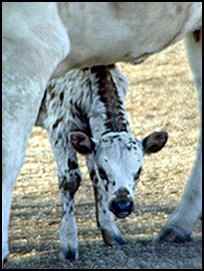 The behavior of this breed of cattle is so mild we can walk among the herd any time, even when the calves are new.  They simply accept our presence as an everyday occurrence.  This also makes it easy if we need to call the cattle towards the barn.  We just yell and they will come in from the far corners of the property, usually at a run and demanding an extra bit of feed, with that “hurry up and dump that bag” attitude.

In the day when tallow was prized, the beef from Longhorns began to lose its popularity and the common meat-breeds of mass-production became favored.  The reason for this being that Longhorn meat is lean, very lean.  We have learned since then that fat is not a very good thing when it comes to the health of the consumer.  Today, the meat from Longhorn steers is once again becoming an esteemed product because of its lean, low-fat, low-calorie and low-cholesterol content.

Remember that Longhorns are more resistant to disease and parasites and that they do well on a range-fed diet?  That important detail comes back into play again in the meat as well.  It means that most Longhorn beef is grass-fed, antibiotic-, steroid- and growth-hormone-free.  All of these are key points in the health-conscious diet of today’s consumer.  Beef from Longhorns has such a dramatic difference from most other beef that the Texas Longhorn Breeders Association of America has published a pamphlet on cooking tips for Longhorn beef.  A few important facts from this pamphlet include: 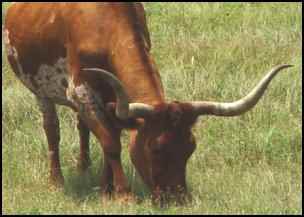 Another thing that makes Longhorns on the homestead so appealing is the fact that they come in a wide variety of patterns and colors, the basic descriptions being solid, roan, speckled, brindle, and grullas.  All of these patterns can be found in any variety of color, however, they commonly from basic versions of red, white, black, yellow and brown. Basically, there is a Longhorn out there with a pattern and color to please anyone. 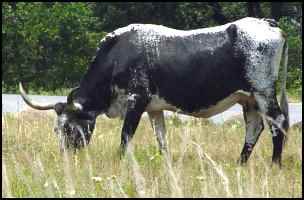 There are some basic facts that might be of interest to anyone considering Longhorn cattle for their homestead.  Bulls will weigh 1,400-2,200 lbs and their horns measure from 50″ to 84″ at maturity.  Cows weigh 600-1,400lbs and the size of their horns at maturity range from 40″ to 84″, however, there is a cow on record with an 87″ horn size.  Mature steers will weigh 1,400-2,500lbs and they are known for the widest horn set of 6-9 feet and hold the record horn-length at 112″.  Averaging 45-75 lbs at birth, calves are small, which helps during labor, and, of course, they are not born with horns.

The history of the Longhorn is as colored as the hide of the wildest marked cow and as broad as the set of horns of the record-setting steer.  But history alone cannot tell the entire story of what the Longhorn breed can offer to any homesteader who is seriously considering adding cattle to their homestead.  The ability of the Longhorn to adapt and thrive in most North American areas cannot be surpassed by any other breed.  When you start with attributes like disease resistance, longevity, fertility, and calving ability and top it with the docile nature of this old but famous breed, there is no question of the Longhorn being the ideal breed of cattle for homesteading.

Adventures of a Beekeeper’s Wife
Are You Cut Out for the “Simple Life”?