Dearfield: A Dream Lost to Drought and Depression

Home /History/Dearfield: A Dream Lost to Drought and Depression 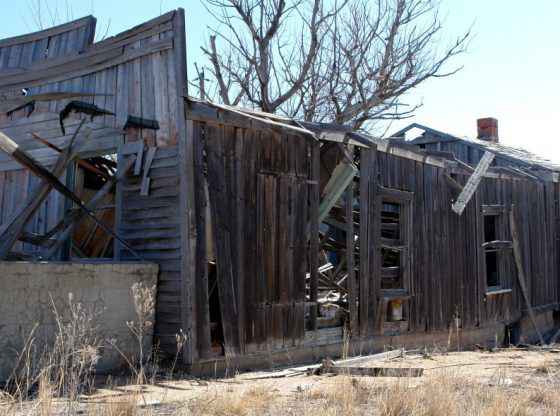 It’s a story with a simple, but remarkable, beginning. In 1910 a Black American entrepreneur joined forces with a legendary spokesman for Black innovation to fulfill the plan of the federal government to populate the Great Plains.

The story combines some names that ring out throughout history.

The entrepreneur was Oliver Toussaint (O.T.) Jackson. Whether he took that middle name for himself or was given it at birth, it shows the consciousness of a deep desire for freedom. It harks back to the first slave rebellion in the Americas, when Toussaint L’Ouverture led a band of African slaves in a battle against their French overlords on the island of Hispaniola, eventually claiming the western portion of the island, now known as Haiti. Toussaint L’Overture turned an uprising into a transformation, “the first free colonial society to have rejected race as the basis of social ranking” (Wikipedia).

The spokesman referred to was Booker T. Washington, famous in his own right and his name, of course, reminding us of our country’s founding father. Booker T. Washington inspired O.T. Jackson with his National Negro Business League and his powerful vision. He proposed that Blacks should be rewarded with White support for their educational and entrepreneurial programs. He pushed for a scheme to have one district or town in each state that would be owned and occupied solely by Black citizens. Though these ideas seem archaic and to some, perhaps, inequitable, they rang with hope for many African Americans, former slaves, longing for property and prosperity.

One of the early pilot programs of Booker’s idea, a possible model for other such districts, was Dearfield, Colorado.

O.T. was a free-thinking free man who had been a farmer and caterer. In 1909 he began working for the governor of Colorado as a messenger. With his political connections, O.T. was well aware of the Homestead Acts, many of them signed into law by Abraham Lincoln, which granted large plots of land to thousands of Americans and American immigrants in exchange for residency and other improvements. The Desert Land Act, based on the Homestead Acts, was in its glory years around the time that O.T. decided to take advantage of it for the benefit of his fellow African Americans. It did not require residency but did require that the land be irrigated. This was part of the big plan to populate and invigorate the arid regions in America’s heartland.

The lands that O.T. and his wife Minerva, also a staunch supporter of Black business development, selected were in northeastern Colorado, near the town of Greeley. Another big name. Horace Greeley was a poor boy who made a name for himself as a journalist, founder of the New York Tribune. He promoted the homesteading initiatives of Lincoln by popularizing the bold catchphrase, “Go West, young man, and grow up with the country.”

In 1910, O.T, then in his fifties, filed for occupancy of 320 acres of arid land in Weld County, Colorado. He and Minerva then began advertising for colonists. One of the first settlers, a Dr. Westbrook, soon came up with the colony’s name, stating that “These are to be our fields and because they are ours, and because we expect and hope to develop them and make them into substantial homes, they will be very dear to us.” Thus, Dearfield was born.

In 1911 there were seven families in Dearfield. This little group would grow in the next ten years to a population of 700 Black and other minority settlers, fewer than O.T. envisioned but still a substantial success for this small but powerful endeavor.

Dearfield’s early settlers battled freezing winters spent in tents or dugouts and the starvation of their few animals. The land they proposed to improve was stubborn and poor, not unlike the settlers themselves. It was frustratingly near the South Platte River, but not near enough for irrigation. It was, of course, desert. Though there was communal use of such water as might naturally occur, there was not enough to create a practical system with the scant resources available, so the settlers agreed on a scheme of dryland farming that would utilize rainfall and seasonal cropping.

Add to the challenge the fact that though the Dearfield settlers were willing, indeed enthusiastic about the project, most of them were not farmers. They were starting, it can be fairly said, from scratch. They figured things out as they went along, eventually raising chickens and cattle. We can be sure they learned a lot more about those critters, and a lot more about moisture conservation, than they’d ever imagined before they moved to Dearfield.

Meanwhile, O.T. and Minerva were in the forefront of making Dearfield a business success. They continued advertising their desert homesteading program, sending out this energizing manifesto to potential, like-minded African American participants as well as to sympathetic, tolerant Whites who might act as financial backers, per the ideas promulgated by Booker T. Washington:

“We are building the Townland Settlement of Dearfield in Colorado and we solicit your cooperation to establish a municipality owned and controlled by colored people to prove that we can control, govern and administer as a part of the state government the same as other people.

“We want 10,000 good farmers, truck gardeners, poultry, dairy and hog raisers, businessmen and women to join in this race undertaking in Colorado … so that we can have a school of government to learn all the principles of government before leaving for Africa, or any other foreign country, to teach people something that we have no knowledge of ourselves.

“The Dearfield program is a home for every family and every man and woman working out of his or her own problem by creating a future for his or her old age and a job for their children.

There is no better location in the U.S. than Colorado to try on a garment of self-government. Dearfield has laid a foundation for your building. … We are soliciting all real, honest-to-goodness race-loving and -talking people to join in some way to build up the Dearfield community. There is plenty of work, talk, and occupation for everyone. …”

By 1915, O.T. and Minerva could point to major success in Dearfield: it had become an actual town with a school, café, grocery store, lodge hall, boarding house and two churches. There was a plan for a college, presumably to be built along the lines of Tuskegee Institute. There were 595 acres in agricultural use, with wheat, corn and sugar beets among the major crops. Newspapers outside the district touted Dearfield’s achievements. Occupants came from all over the US, Mexico, and other countries, indicating that both racial and cultural diversity was welcome and flourishing.  By 1921, the town had a net worth of over a million dollars. “’It was a thriving community,’ recalled former Dearfield resident Eunice Norris in a documentary entitled The Need, The Reality, The Dream. ‘There were a lot of parties, socials, picnics, fishing parties, card playing, basket suppers, songfests, she said, ‘and everybody was happy’” (history.denverlibrary.org).

Yet today, Dearfield is a ghost town. What happened?

A few years of extra rainfall in the teens had pushed Dearfield’s prosperity into prominence, but that was followed in the 1930s by the Dustbowl storms that swept across the region, directly affecting northeastern Colorado, most of Kansas, the Oklahoma panhandle and large swathes of Texas. It was farming itself that took much of the blame for this pestilent phenomenon: the natural tree barriers had been removed and the soil was depleted by deep mono-cropping that killed off protective grasses. The Dustbowl and related factors brought the national mood to a terrible new low, and poor investment policies just about wiped us—the US—out. In desperation, and like folks all over America, the residents of Dearfield started to move away.

Possibly in response to their own sense of threat from these factors, poor Whites began to express blatant, sometimes violent, prejudice against ethnic minorities. The K.K.K. became better known and greatly feared. O.T. lost his long-held job with the governor’s office, drastically reducing his influence just when Dearfield needed it most.

But to their credit, O.T. and Minerva did their best to revitalize the colony in the early 1920s, using their entrepreneurial skills to reframe Dearfield it as the “Valley Resort.” They circulated flyers touting its lodge, its natural beauty and attraction as a hunting and fishing preserve. They did manage to bring in African Americans from Denver who could travel to the “resort” by train. But by 1930, a low point in our economic history, Dearfield was off the census and by 1940, with only 12 residents remaining, it was off the map.

Recently there have been efforts to bring Dearfield back to our attention. The Black American West Museum located in Denver owns the now designated “ghost town” of Dearfield, raising funds to “preserve, protect and tell the story of this historical town”.

As modern homesteaders, we can admire and celebrate the Dearfield settlers’ valiant and, in fact, successful experiment in self-sufficiency.  As has been pointed out by those with the perspective of America’s larger stories, people moved to Dearfield with hopes vested in the idea of progress for a race that was slowly recovering from the degradation of human bondage. They also came prodded by the same idea that prodded many other minority groups from all over the world to take up the challenge of the Homestead Acts—land ownership in exchange for determination and hard work. And some were refugees from the wicked, so-called system of “share-cropping” that defied its own name by sharing the least with the people who worked the hardest. As quoted in Front Porch, a Denver area online magazine, Erma Downey Ingram, who grew up in Dearfield, perhaps put it best: “My folks were working for themselves then. No sharecrop there.”

In all fairness, the economic failure of Dearfield was mostly due to the unwelcoming climate and the agricultural practices of the region and the day rather than by any fault or negligence of its residents.  The dream of a “dear field”—owned and tended, protected and passed on to our children—still beckons, as our ethical heritage and a bedrock principle of our nation.