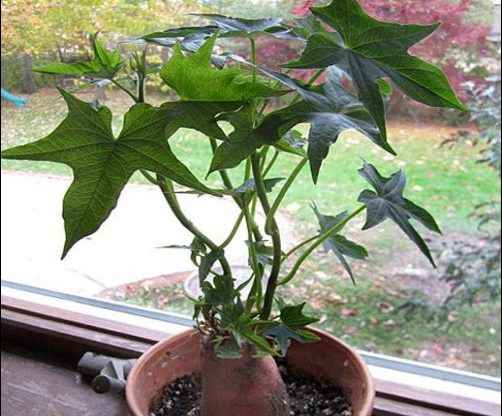 Sometimes we Americans can have some pretty lame attitudes toward food.

We insist that tomatoes are a fruit, but nobody ever puts one in a fruit salad; we don’t seem to be able to flavor anything with just apple, it always has to be apple-cinnamon.  You can, as I did, grow to adulthood (and then some) before learning that sweet potatoes don’t always have to be smothered in a cloyingly sweet sauce and marshmallows.

In fact, it wasn’t until I did learn that last truth that I became a fan of one of the world’s most versatile and nutritious plants.

Think I’m exaggerating?  The modest little sweet potato, (Ipomoea batatas) ranks highest in nutritional value compared to all other major staple foods (corn, rice, wheat, potato, cassava, soybean, sorghum, yam, and plantain).  In fact, in tests by the Center for Science in the Public Interest, on a scale that tested for fiber content, complex carbohydrates, protein, vitamins A and C, iron, and calcium, the sweet potato was not only the highest scorer, but it earned 184 points, 100 points over the next on the list, the common potato.

Sweet potatoes are often recommended as a way to lower hypertension (high blood pressure) and the American Cancer Society, and the American Heart Association both endorse the sweet potato for its disease-prevention and healing qualities.

In sixteenth-century China, a famine developed in the southeastern province of Fujian due to too many people and too little moist bottom-land that would support rice.  To complicate matters, the Little Ice Age of that era had brought two decades of hard, cold rains that washed away rice paddies and drowned their crops.   In a stroke of luck, sweet potatoes, recently discovered by Columbus, and distributed to the rest of the world, were smuggled into China.  When it became apparent that this new crop would grow in abundance on poor soils worthless for rice cultivation, the governor of Fujian distributed I. batatas cuttings and instructed farmers in how to plant, harvest, and cure their tubers.  The sweet potato did the rest, producing prolifically and breaking the famine.  For the next three hundred years, sweet potatoes, not rice, became the staple food of China, and today China produces more sweet potatoes than any other country in the world, over 80% of the world’s supply in fact.

Often called “yams” in the American south, they are actually not yams at all, nor are they any stripe of potato.  In fact, their nearest relative is the morning glory flower, and sweet potato vines produce a trumpet-shaped flower very similar to morning glory.

The sweet potato was first domesticated in or near Central America about 5,000 years ago.  Because the plant is so prolific, productive and easy-to-grow, it spread throughout the Americas, from Peru to New England and throughout the Caribbean.

Columbus took sweet potatoes back to Spain, and they are now grown more extensively in Spain and Portugal than anywhere else in Europe.  The Spaniards carried them to the Philippines, where they spread to Malaysia and China.  Today, they are widely cultivated on every continent except Antarctica, and scientists at Purdue University, because the plant is highly adaptive to various environmental changes, are working to adopt compact cultivars to be grown in outer space.

So in short, the message I’d like to pass on to you is that if you aren’t growing sweet potatoes in your homestead garden already, you really need to give them some consideration.

To do this, you won’t need a lot of space, or even particularly fertile soil, although if your time and effort are of any value at all, you’ll want to maximize your yield.

Here’s how to do that:

There are over 100 varieties of sweet potato including strains that are red, yellow, pink, white, beige and purple as well as the more common orange.  Sweet potatoes are only grown from seed for genetic purposes, the simplest way to produce them being from slips or starts.  While you can make your own starts at home from a grocery-store potato, folks who enjoy giving advice will tell you that the only way to be certain you have certified disease-free roots is to buy them from a reputable seed supplier.  Since there seems to be no sure-fire method for knowing who is a reputable seed supplier, you may choose to make your own slips by cutting a sweet potato in halves or quarters (or leaving it whole) and burying it in potting soil.

Then you’ll want to sprinkle a little water on it, and keep it in a warm place for a few days until it sends up shoots.  When these shoots get to be six or eight inches long (in five or six weeks) they’re ready to be cut off from the larger whole and planted in the ground.

(You can also get a sweet potato to sprout simply by placing it half-submerged in a glass of water which is also a way to create a rather attractive house-plant.)

Sweet potatoes like slightly acid soil, preferring a soil pH between 5.0 and 6.5.   Like most plants, they like a loose, aerated medium to grow in, and they can’t take much frost, so plant the shoots after all danger of frost is passed.

I prefer raised beds or containers and sweet potatoes do very well in both but if you’re planting directly into the soil, it’s recommended that you place the slips 12-18 inches apart in rows three to four feet wide.  Keep in mind that your plants will produce a prodigious amount of vegetation, so much that you may not need to do a lot of weeding or mulching, but they start off slow and don’t care to be crowded by weeds, so pay special attention to keeping out the weeds in the beginning.

After that, your plants will respond well to regular watering, but it’s a good idea to stop, or reduce, watering a month or so before you expect to harvest.  This will result in less splitting of the tubers.

I. batatas doesn’t have a lot of natural enemies, so pesticides probably won’t be needed, especially the first year.  You’ll have healthier plants if you rotate your plantings in successive years.  If something does go wrong, here’s a complete list of sweet potato diseases.

When it’s time to harvest, you’ll see one of the reasons why the sweet potato is such an ideal vegetable for the homesteader: with proper curing, you can expect to keep your harvest for up to thirteen months without refrigeration or special techniques.  (Doomsday aficionados take note.)

To cure the crop, just dry the tubers on the ground two or three hours after harvesting, then allow them another 10 to 14 days of curing in a warm room with moderate humidity.  Afterward, they should be placed in a cool room for storage until ready to be cooked.

Depending on the variety you’ve chosen, it should take about four months for your sweet potatoes to go from planting to harvest.

Once you’ve harvested and cured our crop, you’ll find that I. batatas is about as versatile as any plant you’ll experience.

Not only can you make several cookbooks-worth of tasty dishes, the young shoots and stems are edible and make a nice salad, and sweet potatoes are also very popular with livestock.  In fact, 60% of China’s production is used as animal feed, particularly for hogs.

Sweet potatoes also make a tasty snack raw, some folks cut away the skin from the broader half, and hold the tapered end like an ice cream cone.

Here are a few favorite recipes using sweet potatoes:  To your health!

Place water in a cooking pot and let boil.

Blanch the sweet potato leaves. This is done by putting the leaves in boiling water. Let it stay for about 20 to 30 seconds. Remove the leaves and submerge in a bowl of cold water for 30 seconds, and let dry.

Bake sweet potatoes in preheated oven until soft, about 1 1/2 hours (you can also use a microwave). Remove and let cool slightly.

Peel sweet potatoes, and puree with chicken broth in batches, using enough chicken broth so that it purees smoothly. Bring puree to a simmer in a large saucepan over medium-high heat, then reduce heat to medium-low. Stir in the sugar, salt, nutmeg, black pepper, and cayenne pepper; cover, and let simmer for 10 minutes. Remove from heat, and stir in cream.