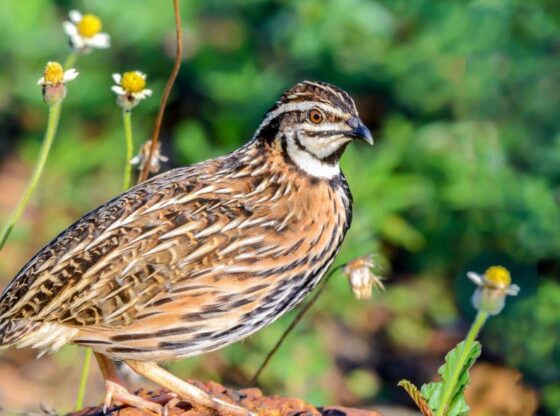 The first thing I say when asked about raising Coturnix quail is this: I wish I knew about them sooner!  Easy to keep in small areas.  Sweet temperaments.  Come in a variety of colors.  Cute as can be.

As acquiring them was unplanned, we did not have quail-specific housing.  We placed them in a huge (8 x 8 on-ground dimensions, 6 feet in height at the apex) arched poultry tractor with waterers and feeders. A tarp protected them from the rain.

The wire floor of their house was lined with empty feed bags and topped with ample bedding straw.  Two small chick-waterers and three food bowls were placed inside.  Two bowls held food, while the third contained crushed, dried eggshells.

The seven baby quail in the brooder were fed 28% wild-game starter-crumble mixed with scrambled quail eggs.  An electrolyte/vitamin powder was added to their water.  Our new radiant heater worked very well.  It was kept at the lowest height.  They were energetic and fun to watch—zooming around the brooder—in and out of the radiant heater.  Egg Number Ten was still in the incubator.

The babies were very aware of us and our whereabouts. They had really bonded with Larry.  Whenever he began talking (anywhere in the house) they would call out to him.  They would quiet when he responded.  When he interacted with them in their brooder, they went nuts.  Zooming around, hopping on top of the radiant heater to get closer to him, and peeping up a storm.  Larry was the official quail daddy.

The dark curled toe chick developed wry neck.  We gave it a blend of vitamin e oil, selenium, and electrolyte/vitamin water via an eyedropper.  We hoped for the best, but, sadly the poor little critter drowned in a half-inch of water.

10 New Reasons to Homestead Now
Zen and the Sport of Scything: Tai-chi or Golf?